For days, we’ve been dealing with the aftermath of the Democratic National Committee’s email scandal, in which a top-level official suggested a way to out Bernie Sanders as an atheist in order to help Hillary Clinton beat him in two primaries where the Southern Baptist turnout was particularly large.

On yesterday’s episode of The Five on Fox News Channel, co-host Greg Gutfeld offered perhaps the best response to the controversy we’ve heard so far, at least when it comes to the use of the A word. (That’s right. I used “Fox News Channel” and “best” in the same sentence. On purpose.)

Gutfeld rightly pointed out that it made no sense to use the word “atheist” to slander someone, even a political candidate, since atheists aren’t the problem in this world. 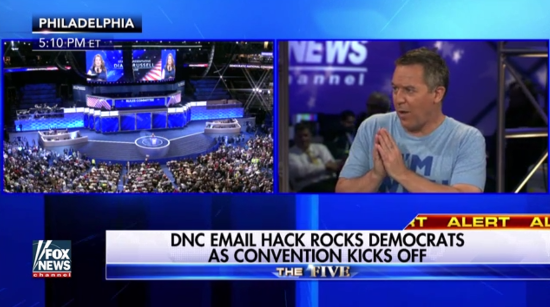 What bugs me about it is that… what they were trying to do was go after Bernie Sanders for being, maybe, an atheist. As if being an atheist is a really bad thing.

Atheists didn’t just try to shoot up a wine bar in Germany.

Atheists didn’t shoot up a gay club in Orlando.

And atheists did not drive a truck into a crowd in France.

An Islamist did. A religious extremist did it. Atheists don’t do that.

Atheists don’t do that. Damn right we don’t. Not in the name of atheism, or because Richard Dawkins told us to, anyway.

In case you’re wondering, Gutfeld is a Libertarian who has previously said he’s non-religious (though not quite an atheist).

The other Fox News hosts followed up with a conversation about how awful it was for the DNC to try and label Sanders as an atheist when he’s said repeatedly that he’s Jewish. I’ll leave it to readers to consider the irony of that, given all the times the same network has discussed President Obama being a secret Muslim.

(Thanks to Hal for the link)

July 26, 2016
Sen. Cory Booker in DNC Speech: People of "Any Religion or None At All" Deserve Equal Rights, Too
Next Post

July 26, 2016 After Wasting $60 Million, the Iraqi Prime Minister Has Finally Banned Fake Bomb Detectors
Browse Our Archives
What Are Your Thoughts?leave a comment