Dr. Jill Stein, the Green Party candidate for President (currently polling in the low single digits), responded to an inquiry this afternoon from American Atheists’ Dave Silverman about whether any candidates would dare to reach out to non-religious voters. 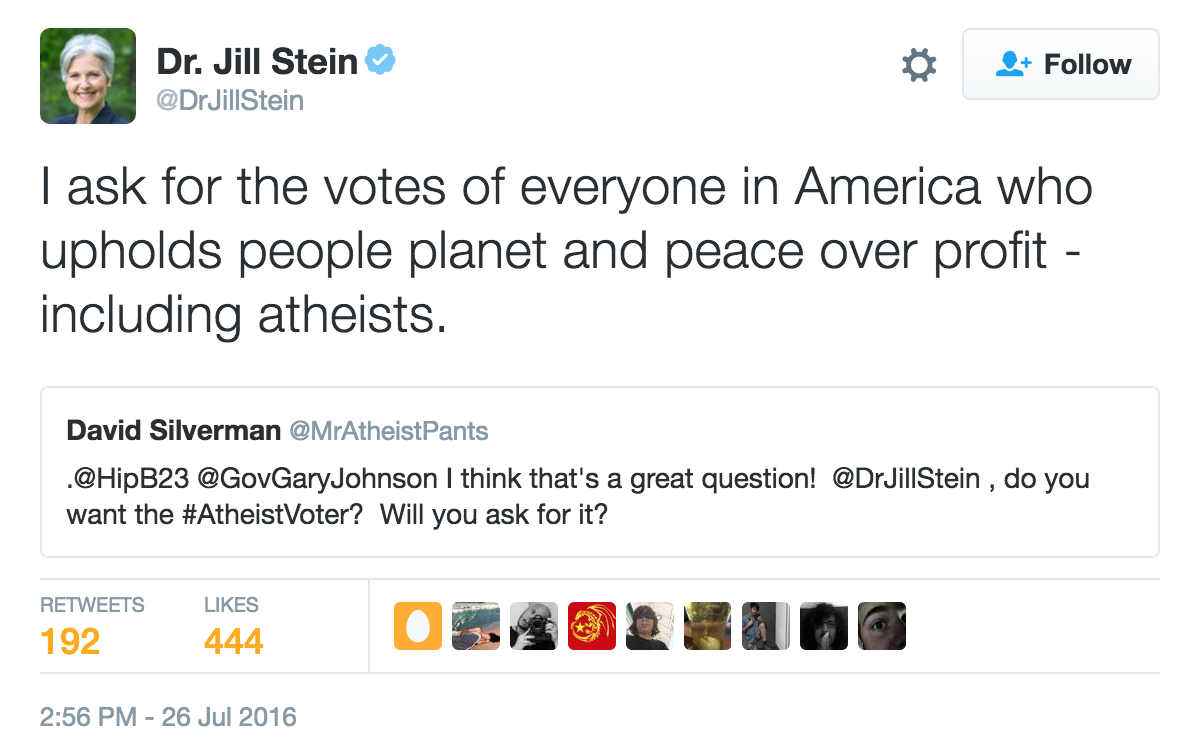 Okay, so that reads more like an afterthought, but it’s more than any other candidate has done. Will Hillary Clinton dare to do something that, um, bold?

I know there’s a lot of debate about third party candidates, and how a vote for Stein or Gary Johnson in this election is basically helping Donald Trump get into the White House, but that fear would be mitigated if Democrats took more progressive stands and really work to earn the votes of oft overlooked minority groups. Atheists included.

By the way, I’m still voting for Clinton. There’s far too much at stake — and I care too much about LGBT people, women, and church/state separation — to vote for a candidate who has no real shot at winning in a couple of months and hand the election to someone who would roll back any progress we’ve made over the past several years. That’s not even getting into Stein’s politics.

I’ve said this before, but it makes no sense to put pride in front of practicality. Just ask the Floridians who voted for Ralph Nader in 2000.

July 26, 2016 In Germany, 50,000 Children a Year Are Going Through Atheist "Confirmations"
"Such a powerful god! It takes him forty years to lead "his" people to their ..."
Rick O'Shea Everything Wrong With Exodus 7 in ..."
"Can't figure who is the bad guy here... Gawd, Pharaoh, Moses, or all those Jooos. ..."
Cozmo the Magician Everything Wrong With Exodus 7 in ..."
"It would be hard to find a whole page without violence and/or hatred. Some years ..."
Rick O'Shea New Southern Baptist Leader: QAnon is ..."
"Are you sure he didn't say this?https://uploads.disquscdn.c..."
kelemi Evangelist Robin Bullock: God Spoke To ..."
Browse Our Archives
What Are Your Thoughts?leave a comment