Of all the ways money has been wasted by Iraqi security forces, one of the most frustrating has been the purchase of 1,500 divining rods — costing “$16,500 to $60,000 each” — which were supposed to detect bombs. Unfortunately, they worked just as well as if you held your phone over the ground to “sense” if there was gold buried underneath. 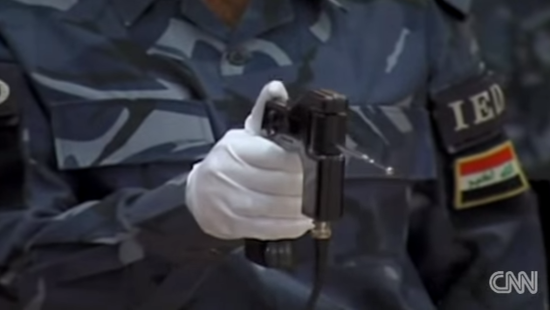 Iraqis spent $60 million on the ADE 651 sticks. They wasted the money even after the British people who made them were convicted of fraud.

But after a suicide bombing earlier this month that killed 300 people — and went undetected (of course) by the ADE 651s — Prime Minister Haider al-Abadi has finally banned the worthless devices. Just because they’re banned, though, doesn’t mean they’re entirely out of commission:

In some places, the wands are still being used — at some checkpoints in Baghdad and in the southern port city of Basra, Iraq’s third-largest city — nearly two weeks after the Baghdad bombing. They also were used across the holy city of Najaf south of Baghdad for at least a week after al-Abadi’s order before they were finally recalled.

After the July 3 blast, al-Abadi fired the military officer in charge of Baghdad’s security and accepted the resignation of Interior Minister Mohammed Salem al-Ghabban, who was in charge of police.

This is what happens when critical thinking goes out the window. Consider how many people have died because a bogus device failed to detect bombs that later exploded. And how much money was spent on a tool that worked no better than a coin flip, with far more disastrous consequences.

July 26, 2016 The Democratic Party Platform is a Breath of Fresh Air for Progressives
Browse Our Archives
What Are Your Thoughts?leave a comment