Hillary Clinton: “I Am Adamantly Opposed to Anyone Bringing Religion Into Our Political Process” July 25, 2016 Hemant Mehta

Hillary Clinton: “I Am Adamantly Opposed to Anyone Bringing Religion Into Our Political Process”

As we’ve mentioned multiple times already, WikiLeaks revealed over the weekend that top Democratic National Committee officials were trying to “out” Bernie Sanders as an atheist back in May, thinking it would hurt him in the primaries. While that never happened, it revealed something very disturbing about how the DNC works as well as perpetuated the idea that a candidate’s supposed atheism could be used as a political weapon.

Last night, 60 Minutes aired the first joint interview with Hillary Clinton and her running mate Tim Kaine. Reporter Scott Pelley asked them about those DNC emails, but the exchange didn’t make it to the air. Thankfully, CBS posted it online: 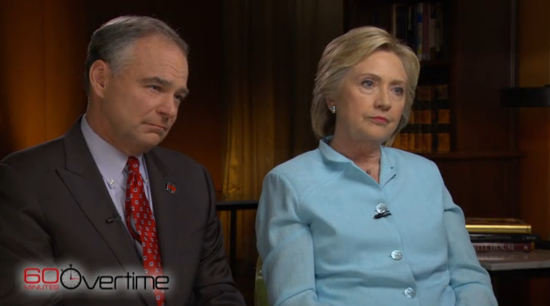 PELLEY: … Some internal emails from the Democratic National Committee have come out that appear to show an effort to undermine the candidacy of Bernie Sanders. Brad Marshall, the Chief Financial Officer of the Committee wrote in an email: “For Kentucky and West Virginia, can we get someone to ask his belief? Does he believe in a god? He had skated on saying he has a Jewish heritage. I think I read he is an atheist. This could make several points difference with my peeps.” Did you know anything about any of that?

CLINTON: No, I didn’t know anything about it, and I haven’t read any of those, but I am adamantly opposed to anyone bringing religion into our political process. I mean, the Constitution says no religious test, so that is just absolutely wrong and unacceptable.

KAINE: I was a DNC chair… during the first Obama term. You’re not going to find anybody at the DNC or the RNC or any political organization who is a complete “agnostic,” who doesn’t have an opinion about a candidate. I mean, those of us who are kinda in the realm, we’ve got opinions about people. But there’s a difference between having an opinion about somebody and having a candidate that you prefer over somebody else. There’s a difference between that and trying to alter the outcome.

That’s not a bad political answer from Clinton, but it remains a frustrating one. It goes back to what I’ve written before about Clinton’s self-imposed refusal to reach out to non-religious Americans.

How hard would it have been for her to say this instead?

“I’m opposed to anyone bringing religion into our political process. But even if Sen. Sanders were an atheist, which he’s not, so what? Why would that matter? Atheists are just as patriotic and capable of being President as anyone else. So I’m deeply offended by this idea that candidates’ religious or non-religious labels should be used as a black mark against them. Let’s debate their policies. Let’s debate the ideas that will impact America. Their theology is their business.”

It’s not completely far-fetched. Republican Secretary of State Colin Powell said something similar when then-Senator Barack Obama was being called a Muslim during his 2008 campaign:

I’m also troubled by, not what Senator McCain says, but what members of the party say. And it is permitted to be said such things as, “Well, you know that Mr. Obama is a Muslim.” Well, the correct answer is, he is not a Muslim, he’s a Christian. He’s always been a Christian. But the really right answer is, what if he is? Is there something wrong with being a Muslim in this country? The answer’s no, that’s not America. Is there something wrong with some seven-year-old Muslim-American kid believing that he or she could be president? Yet, I have heard senior members of my own party drop the suggestion, “He’s a Muslim and he might be associated terrorists.” This is not the way we should be doing it in America.

That’s the sort of honest, powerful answer Clinton didn’t give. Her answer was safe, but it wasn’t inspiring. And while she’ll have my vote in November — I’m not a masochist who’ll vote for a third party only to see Donald Trump end up in the White House — there’s so much more Clinton could be doing to really earn it.

(Thanks to Nathan for the link)