Here’s How Hillary Clinton Should Have Responded to the DNC Emails About Bernie Sanders’ Faith July 25, 2016 Hemant Mehta

I offered my own take earlier today about how Hillary Clinton should have responded to the whole controversy involving leaked emails from officials at the Democratic National Committee. It’s clear some leaders wanted to use Bernie Sanders‘ perceived atheism against him, and Clinton’s response left me wanting so much more. 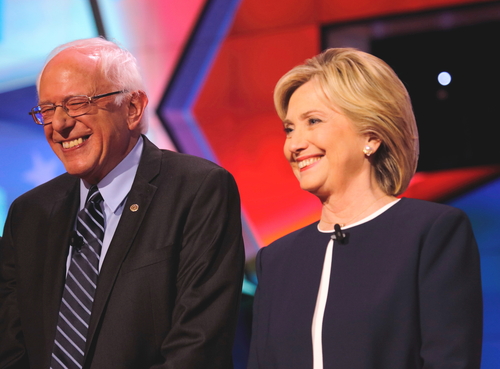 She said on 60 Minutes last night:

I am adamantly opposed to anyone bringing religion into our political process. I mean, the Constitution says no religious test, so that is just absolutely wrong and unacceptable.

It’s a fine response, but I thought she missed an opportunity to defend atheists running for public office by simply pushing back with, “Bernie’s not an atheist, but even if he was, who cares?”

“Reports that a senior staff member for the Democratic National Committee suggested using Bernie Sanders’ faith as a line of attack are deeply troubling. Senator Sanders has spoken frequently about his Jewish faith, and it is not for anyone — and certainly not the DNC — to question the authenticity of his religious belief. The email also wrongly suggests that being an atheist is somehow a disqualifier for public office. A candidate’s faith, or lack of faith, should not be either a qualification or a disqualification for public office — not only because it’s the right thing, but because that is what Article VI of the Constitution requires of us. What should matter is the candidate’s ability to protect the religious freedom of all Americans regardless of their faith or belief. It is fitting that those accountable for these emails take responsibility.”

So well put. It’s not too late for the Clinton campaign to say something much more forceful about the anti-atheist slander used against Sanders.

(Image via Joseph Sohm / Shutterstock.com. Thanks to Josh for the link)

July 25, 2016
Hillary Clinton: "I Am Adamantly Opposed to Anyone Bringing Religion Into Our Political Process"
Next Post

July 25, 2016 DNC Lineup Features a Transgender Speaker For the First Time
Browse Our Archives
What Are Your Thoughts?leave a comment