David Barton: I’ll Only Debate Atheists If I Get to Speak 92% of the Time

Christian pseudo-historian David Barton gave a sermon last month at Calvary Chapel Salt Lake (Utah) in which he explained the bizarre conditions under which he’d debate an atheist. 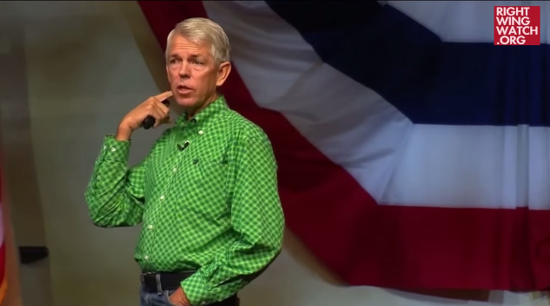 The whole point of a debate is that both sides get to make their case and may the best arguments win. Barton believes that he should get a huge head start because most people already agree with him. (Good thing we’re not debating race or else African Americans would barely get to speak, much less Asian people.)

Not that this should stop atheists from debating him. We would offer more reason and logic in our limited speaking time than Barton could give in his entire sermon. (You can hear this particular sermon right here. The relevant portion begins at the 1:24:45 mark.)

By the way, Barton’s still wrong. Christians now make up 70% of the country even when you lump them all together. The non-religious are nearly a quarter of the population.

He’s pulling the 92% number out of his ass, which is probably where all of his other math mistakes come from.

***Update***: American Atheists tells me they have no record of ever inviting Barton for a debate. I don’t know if Barton mentioned the wrong group or if he’s making the whole story up…

July 25, 2016
Center For Inquiry Calls for Resignation of DNC Official After Leaked Anti-Atheism Email
Next Post