Tim Kaine Shows You Can Be a Catholic Without Governing Like One July 24, 2016 Hemant Mehta

Hillary Clinton‘s selection of Virginia Senator Tim Kaine as her running mate may not make for exciting headlines, but it’s a strong pick for a number of reasons and doesn’t hurt her in any meaningful way. 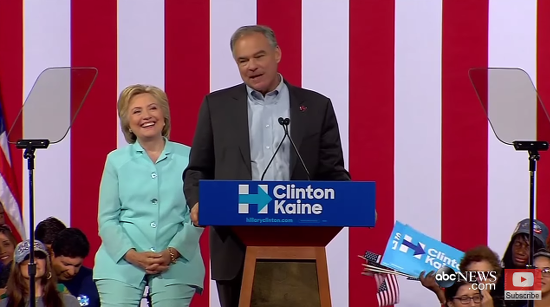 As journalists share his biography, one thing about Kaine that’s getting a lot of attention is his devotion to his faith. He was raised as a Roman Catholic, attended Rockhurst High School (an all-male Jesuit school), served as a missionary to Honduras, currently attends St. Elizabeth Catholic Church where he helped start a men’s study group, and said, “My faith is central to everything I do.”

Yet none of that should give church/state separation activists any concern. Tim Kaine is an example of someone who may be privately religious but publicly secular. That’s not to say he’s a strong progressive on many issues — far from it. But consider how Kaine handled a few issues on which the Church has a position.

It’s clear his faith isn’t a major factor when it comes to legislation, even if there’s plenty about his positions to criticize.

While the Catholic Church believes all abortions are a “moral evil,” and Kaine himself is “personally opposed” to the practice, he has supported abortion rights when serving in elected office. This is a man who has a 100% rating from Planned Parenthood.

He’s not perfect on the issue by any means. For example, he supported parental notification laws, requiring teenagers who want to terminate their pregnancies to have their parents’ approval, albeit with a loophole in the legislation. He also supported bans on partial-birth abortions, but again, only if there were exemptions based on the health of the mother.

The good news is that with Clinton at the helm, the idea that Kaine’s Catholic faith would ever be an obstacle to a woman’s right to choose is absurd, whether we’re talking about legislation or Supreme Court appointments. It’s a similar stance to the one taken by Vice President Joe Biden. To quote Krystal Ball, “Kaine doesn’t want to control my body and I don’t want to control his mind, so we’re all good there.”

This one is complicated.

The Catholic Church believes the death penalty is on the table when it comes to punishments, saying in the Catechism that it “does not exclude recourse to the death penalty.” But there’s conflict on this position even within the Church. The United States Conference of Catholic Bishops, to name one group, is strongly opposed to the practice. It’s obvious hypocrisy, right? How can the Church be pro-life and pro-death penalty?

So what do you do when your Church says capital punishment is permissible and your state of Virginia embraces it (ranking second only to Texas in the number of executions since 1976), but you’re morally opposed to it?

In Kaine’s case, he allowed the law to works its course without getting in the way. Saying he wanted to abolish the death penalty or commuting the sentences of prisoners on death row would have been political poison. 11 people were put to death while he was Governor. A profile in courage, it was not.

However, Kaine also vetoed multiple bills calling for death penalty expansions and temporarily halted the practice when there was an inability to procure the right drugs.

In short, he can be better on this issue. But if he’s wavered in the past, it was for political reasons and not religious ones. I know that’s not exactly a ringing endorsement, but it’s clear the Church isn’t the main factor influencing his decisions.

This may be the best example of Kaine bucking Catholic tradition even when it would have been easy, politically, to dodge the issue or go the other way. Last year, when Pope Francis visited Washington, D.C., Kaine issued a public statement calling for the Church to change its policies and begin ordaining women:

Kaine said ending the church’s centuries-old rule that only men can be ordained would be the most significant thing the pope could do.

“If women are not accorded equal place in the leadership of the Catholic Church and the other great world religions, they will always be treated as inferiors in earthly matters as well,” Kaine said in a statement. “There is nothing this Pope could do that would improve the world as much as putting the Church on a path to ordain women.”

For those of us outside the Church, this is a non-controversy. Of course women should be ordained; what’s the big deal? But for a high-profile Catholic politician to say the same thing, in advance of the Pope’s visit, takes courage.

Kaine, like most Democrats (including President Obama), came around on this issue only recently. However, when he backed marriage equality in 2013, it was clear he didn’t give a damn about the Church’s opposition to it.

“I believe all people, regardless of sexual orientation, should be guaranteed the full rights to the legal benefits and responsibilities of marriage under the Constitution,” Kaine’s statement reads. “I hope the Supreme Court will affirm that principle.”

Kaine also publicly opposed same-sex adoption, as the Church does, for a long time. However, in 2011, he said he was in support of them.

You can criticize how long it took for him to get to this place — just as you can with Obama and Clinton — but the point is that he’s in the right place now. And it’s a position directly at odds with the teachings of the Catholic Church, which says homosexual acts are “intrinsically immoral and contrary to the natural law” and believes homosexual “tendencies” are “objectively disordered.”

I’m not saying all this to show Kaine is a liberal in all the right ways. He’s not. Neither is Clinton. We’re never going to find a politician who checks every box for us (and also has a decent shot at winning). But at least when you consider Kaine’s devout faith and how it might impact his politics, it’s clear he’s not afraid to stand against the Church when he knows his religious beliefs shouldn’t become public policy. He may bow down to political pressure, but not the Pope. That means it’s up to progressives to push him in the right direction; it’s worked before.

Compare all that with Gov. Mike Pence, who has used his office to promote evangelical Christian beliefs even when it made for awful, discriminatory, harmful public policy.

You may not love Kaine, and you may be quick to jump on some of his decisions while in office, but the alternative is so much worse. And if there’s one thing to take away from Kaine’s career, it’s that he’s willing to change his mind if there’s good reason to do so. Trump, on the other hand, can’t bring himself to apologize for anything.

July 24, 2016
In Southeast Texas, An Atheist Group is Helping a Homeless Camp in Ways Christians Are Not
Next Post

July 24, 2016 Christian Preacher Wants to Raise $455,000 Online... For What, I Don't Know
Browse Our Archives
What Are Your Thoughts?leave a comment