Alabama Sen. Jeff Sessions, who sits on the Senate Judiciary Committee, sat for a panel discussion this week during the Republican National Convention and criticized Supreme Court Justice Sonia Sotomayor for her alleged irreligiosity: 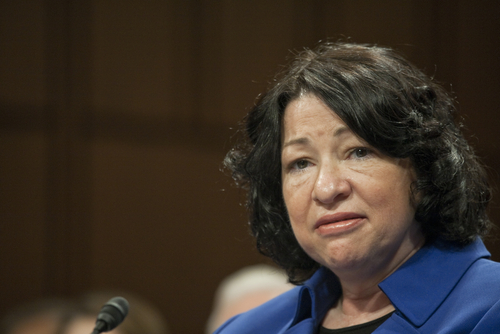 There’s so much to unpack here.

1) Justice Sotomayor is Roman Catholic, like most of her colleagues on the bench. She may not attend mass every week, but she has said she believes in God. So Sessions’ concern isn’t that she’s not religious, and unable to see objective truths. It’s that she doesn’t believe in God the right way, which is to say, his way.

2) It’s bullshit to claim that non-religious people don’t have objective morality and are therefore bad arbiters of the truth. The whole point of the Supreme Court is that there are instances where the “truth” isn’t clear cut. Two intelligent people could make the case for two different sides. If Sessions doesn’t like her decisions, so be it. But to suggest she’s incapable of doing her job properly because she’s not sufficiently religious is completely inappropriate coming out of the mouth of a senator.

3) Sotomayor was right when she said people have different perspectives, and your life history and background will influence how you look at cases in front of you. (Case in point: A blistering dissent she offered last month after the Court ruled that illegally obtained evidence didn’t necessarily have to be thrown out in a case.)

4) Consider what Sessions was saying about atheists here. None of the current justices are non-religious, but what if a future President nominated someone who was openly atheist? It shouldn’t make one damn bit of different in terms of whether that person could do the job, but Sessions is implying that a justice’s religious beliefs could be a disqualifying characteristic.

It’s not the first time Sessions had made this argument. Just last month, at the Faith and Freedom Coalition’s Road to Majority conference, Sessions made the same arguments against Sotomayor, adding:

“You see, this is a postmodern, relativistic, secular mindset and I believe it’s directly contrary to the founding of our republic,” he said.

In Sessions’ world, those who apply the law the best way they see fit are fantastic if they agree with him… and horrible heathens otherwise.

(Image via K2 images / Shutterstock.com. Thanks to Richard for the link)