In Southeast Texas, An Atheist Group is Helping a Homeless Camp in Ways Christians Are Not July 24, 2016 Hemant Mehta

In Southeast Texas, An Atheist Group is Helping a Homeless Camp in Ways Christians Are Not

A news station in Texas aired a depressing yet powerful segment yesterday about a local homeless camp. The piece about the tent city included sound bites from a woman who’s eight months pregnant and a man saying they “always need water.”

But reporter Ashley DeVriend also spoke with atheist Robert McWilliams, founder of the group Southeast Texas Atheists Helping the Homeless. They frequently bring toiletries, food, clothes, and more to the area to help everyone get by: 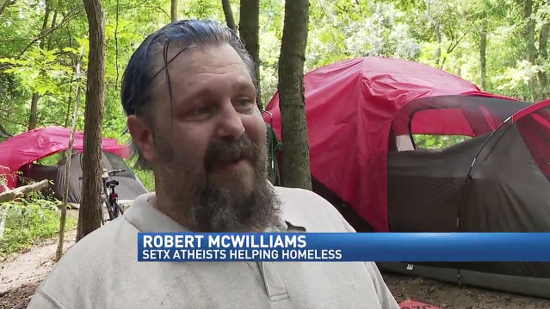 [McWilliams] says he lived on the streets for three years. Someone helped him and now he wants to give back.

“I figure if I can do the same thing to someone else, if just one person gets back from off the streets then its worth it,” he said.

It’s just an amazing kind of humanistic activism. Prayers won’t help the homeless, but your donations will. If you’d like to contribute to McWilliams’ work, he has an Amazon wish list of products he needs for future giveaways.

By the way, there was one anecdote that didn’t make the segment but seems relevant. You might be wondering if local churches offer to help these homeless people. They do. But it’s not the same, as the atheist group explained on its Facebook page:

Today, as we had lunch with our local tent city, we were told us taking the time to hang out with them, eating and having a good time was more important than the actual food.

They said a few churches also bring food to them, but hand it out of their vehicles then quickly make their exit without as much as asking them how their day has been.

We were told that treating them as humans and not just a charity was the best part of our visit.

The Christian version of helping the homeless here sounds like a week-long mission trip overseas. Sure, you think you’re helping, but what those communities really need is a long-term investment from people who aren’t just looking for that photo-op.

At least the atheists in this Texas town realize that.

July 24, 2016
Cringeworthy Moments in the Life of an Atheist
Next Post

July 24, 2016 Tim Kaine Shows You Can Be a Catholic Without Governing Like One
Browse Our Archives
What Are Your Thoughts?leave a comment