Bernie Sanders Responds to DNC Email Leaks: “I Am Not An Atheist” July 24, 2016 Hemant Mehta

Bernie Sanders Responds to DNC Email Leaks: “I Am Not An Atheist”

On Friday, after WikiLeaks posted nearly 20,000 internal Democratic National Committee emails, we learned that there was a line of attack against Bernie Sanders, discussed by several top DNC officials, that included getting someone to publicly ask him if he believed in a god.

The idea was that outing him as an atheist could hurt his upcoming primary results in states like Kentucky and West Virginia.

Needless to say, that didn’t happen. And even if it did, Sanders would have probably given his stock response about religion, which is that he is religious, but in a very humanistic way. His religion is helping people in any way he can.

In interviews since Friday, Sanders hasn’t made a big deal about this. He plans to fully support Hillary Clinton during his speech this week, contrary to how Ted Cruz “supported” Donald Trump by asking the crowd to vote their conscience.

CNN’s Jake Tapper asked Sanders directly about the email controversy this morning on State of the Union. In addition to saying it didn’t surprise Sanders since he had argued for a long time that the establishment was backing Clinton, he responded directly to the point about his religious beliefs: 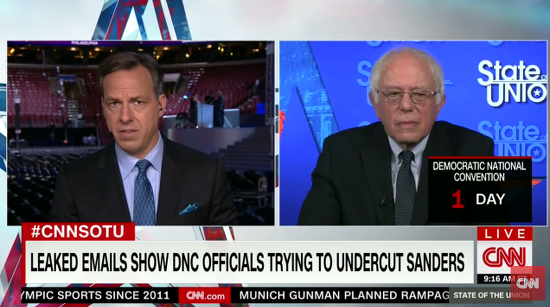 First of all, I am not an atheist. But aside from all of that, I mean, it is an outrage and sad that you would have people in important positions in the DNC trying to undermine my campaign. It goes without saying the function of the DNC is to represent all of the candidates, to be fair and even-minded.

I don’t blame him for his frustration with the DNC, but I think he understands that this religion issue didn’t ultimately hurt him. It’s not like Clinton was the one going after his beliefs, and it’s not like they really came into play. He spoke about his faith very openly during interviews throughout the campaign. He never shied away from saying he had a very secular approach to religion.

And then he talked about what really mattered right now: Defeating Donald Trump. Whatever issues Sanders has with the DNC and establishment politics, even he knows that our country would be better off in Clinton’s hands, in an administration under which he will have a stronger voice than ever before.