A New Rap Song Encourages Atheists to “Stand Up” and Be Counted July 23, 2016 Hemant Mehta

When you make videos on YouTube, you hope people will watch what you’re posting. But rarely do you think, “I really hope someone samples this in a rap song.”

Chris Beckstrom, however, did a fantastic job with it. “Stand Up!,” an anthem to atheists who come out of the closet, is one of several tracks that appears on an album his group The Fonetiks will be releasing next week. 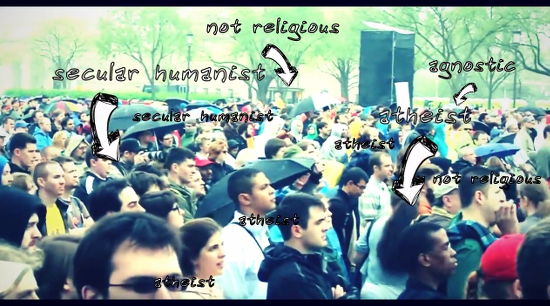 Well you’re certainly entitled to that, although I disagree
Seems kinda silly, but that’s just me
Believe what you want, we gotta live free
You do you and I’ll do me

Stand up
I’m talking to the atheists, secular humanists
Gotta get agnostics up in this business
Stand up for what’s right
We’re all fighting the same damn fight
Stand up

All the lyrics are right here. I’ll let you know when the album is out.