Atheists to House Majority Leader: If We’re Not Divided By Religion, Let Us Deliver an Invocation July 22, 2016 Hemant Mehta

Atheists to House Majority Leader: If We’re Not Divided By Religion, Let Us Deliver an Invocation

On Tuesday, House Majority Leader Kevin McCarthy (R-CA) said in his speech at the Republican National Convention that “Republicans believe in an America that isn’t divided by race, religion, or gender.” 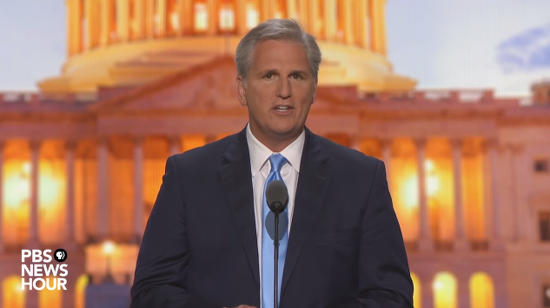 While that line is completely ignorant of the realities of our country, American Atheists seized on that line about how we’re not divided by religion to ask McCarthy a favor: They want him to invite a humanist chaplain to deliver an invocation on Capitol Hill:

The House Chaplain has stated that a member of the U.S. House must sponsor a visitor who gives the invocation. We are asking you to do this to show that the Republican party is not just a Christian party, but one that is open to citizens of all religious traditions — and those who have no religious beliefs.

McCarthy fell right into that one.

“This is an opportunity for Majority Leader McCarthy and all of the House leadership to show that they acknowledge the huge number of Americans who are not religious,” said Nick Fish, National Program Director of American Atheists. “Inviting a guest to deliver a humanist invocation would demonstrate their commitment to celebrating our differences and truly representing all Americans.”

Silly, Nick. Doesn’t he realize that the modern GOP is a party of rhetoric over action? They claim we’re equal, but Christians will always have the upper hand.

Sure, McCarthy could easily dismantle that stereotype by saying yes to this rather simple request… but that would anger the evangelical base that sees any outreach to non-Christians as an attack on their faith. I’m not expecting a response, much less a rejection.