Another Reason to Oppose Trump? If He Loses, Duck Dynasty‘s Phil Robertson Will Go Into Hiding July 22, 2016 Hemant Mehta

Another Reason to Oppose Trump? If He Loses, Duck Dynasty‘s Phil Robertson Will Go Into Hiding 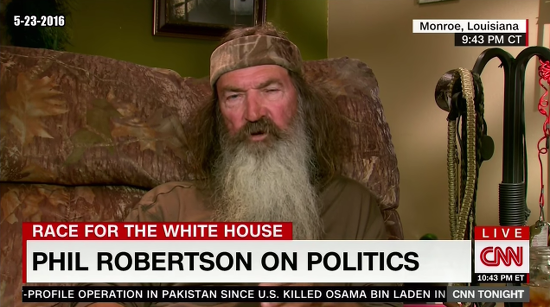 If the Republicans and the evangelicals do not get off their posteriors and vote, I think I’m going to head back to the woods and hide out.

Robertson was a Ted Cruz backer earlier this year. Readers of this site may be familiar with the time he told a story about raping an atheist’s daughters, murdering his wife, and castrating him, all in the name of Christian morality.

July 22, 2016
An Atheist Just Sued the State of Illinois for Not Allowing Secular Celebrants to Solemnize Marriages
Next Post

July 23, 2016 This Unofficial Donald Trump Campaign Song May Be Worse Than the Candidate Himself
Browse Our Archives
What Are Your Thoughts?leave a comment