In an excellent segment on last night’s The Daily Show, correspondent Jordan Klepper spoke with Pastor Mark Burns, the man who delivered the benediction at the Republican National Convention on Monday and called on God to help “defeat the liberal Democratic Party.” 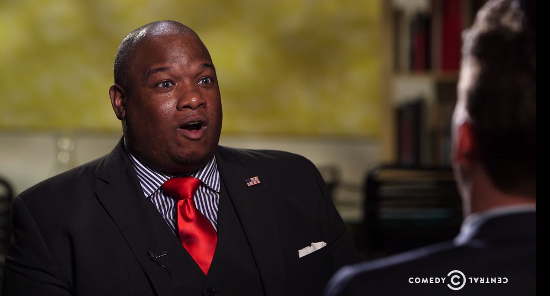 The “Amazing Grace” bit had me cracking up.

I always thought it was hard enough for pastors to defend absurd biblical stories. But it’s so much more entertaining to see them bending over backwards to convince people Trump is a True Believer™.

July 21, 2016 A Christian Theme Park in Florida is Losing Money Fast
"Many years ago, when there was hair, I taught a class on the sociology of ..."
BensNewLogin Are You Non-Religious? Then Take the ..."
""NO, Kandee!" explained the Angel, with just a hint of exasperation, "Jesus clutches YOU to ..."
Mundusvultdecipi Scott Lively: I Asked God to ..."
"So they'll make it a nightmare to vote, and even if you beat the odds ..."
The Guy MAGA Cultist: “I’ll Admit It. I ..."
"If there was a good god, the strip club would still be standing; Shitely, not ..."
The Guy Scott Lively: I Asked God to ..."
Browse Our Archives
What Are Your Thoughts?leave a comment