I guess the Republicans ran out of minorities to speak and they’re recycling the few they have.

Burns made the most of the opportunity, going ALL CAPS throughout the speech, taking everything up to 11, and inadvertently creating atheists all over the country. (I hope.) 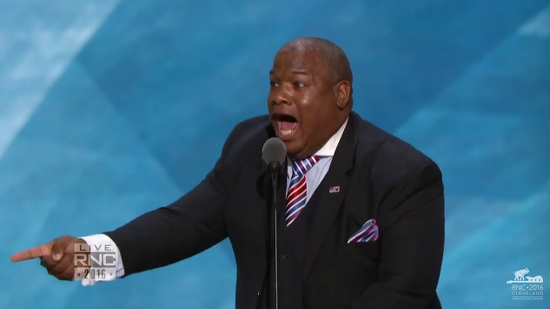 In addition to saying the other party is full of “race-baiting Democrats,” leading the crowd in a cheer of “All Lives Matter,” and oddly promising universal employment under a President Donald Trump, he proved yet again that gullible people will accept anything you say as long as you do it loudly and with confidence.

We’re used to pastors who preach nonsense from a stage, but it’s all the more disturbing when they’re using their platforms to promote divisive, hateful politics in defense of a hate-monger.

Pastor Burns is as ignorant as the people he spoke to tonight. He believes Trump is a True Believer™ because the candidate pays lip service to Christianity. It’s another reminder of just how important critical thinking is, since this speech is what you get when you throw that out the window.