On Mr. Robot, Elliot Delivers Monologue About How Religions Are “Metastasizing Mind Worms”

I know absolutely nothing about the show Mr. Robot, but I’m told that Elliot gave a powerful speech about God during last night’s episode (titled “eps2.1k3rnel-pan1c.ksd”).

If you want context, look in the comments, where I’m sure helpful people will provide it. I don’t know what’s going on. For all I know, I’m posting a huge spoiler.

In the meantime, here’s the clip and the transcript: 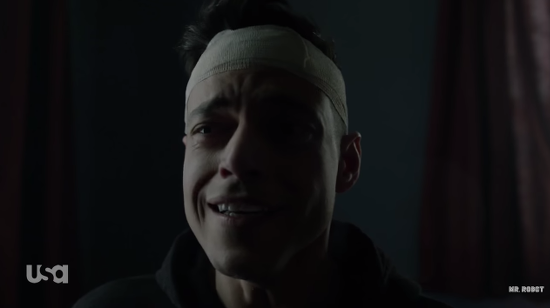 Is that what God does? He helps? Tell me, why didn’t God help my innocent friend who died for no reason while the guilty ran free?

Okay. Fine. Forget the one-offs. How about the countless wars declared in His name?

Okay. Fine. Let’s skip the random, meaningless murder for a second, shall we? How about the racist, sexist, phobia soup we’ve all been drowning in because of Him?

And I’m not just talking about Jesus. I’m talking about all organized religion. Exclusive groups created to manage control. A dealer getting people hooked on the drug of hope. His followers, nothing but addicts who want their hit of bullshit to keep their dopamine of ignorance.

Addicts. Afraid to believe the truth. That there’s no order. There’s no power. That all religions are, just metastasizing mind worms, meant to divide us so it’s easier to rule us by the charlatans that wanna run us. All we are to them are paying fanboys of their poorly-written sci-fi franchise.

If I don’t listen to my imaginary friend, why the fuck should I listen to yours? People think their worship is some key to happiness. That’s just how He owns you. Even I’m not crazy enough to believe that distortion of reality.

So fuck God. He’s not a good enough scapegoat for me.

God’s followers are “nothing but addicts who want their hit of bullshit to keep their dopamine of ignorance.” Daaaamn. They should frame that somewhere inside Ark Encounter.

(Thanks to Kiera for the link)

July 21, 2016
Focus on the Family Warns Parents That Pokémon Go Includes "Evolution" of Creatures
Next Post

July 21, 2016 Pokémon No — Finally, a Reason to Move to Saudi Arabia
Browse Our Archives
What Are Your Thoughts?leave a comment