The New York Times reports that an independent investigation into “sexual and possible criminal misconduct” by a Catholic archbishop was effectively stunted by Archbishop Carlo Maria Viganò, the Vatican’s ambassador to the U.S. at the time. 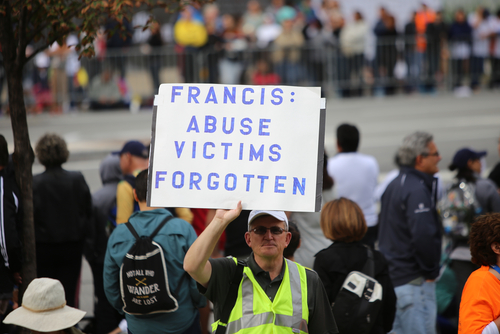 Making matters worse, when one of the priests involved in the investigation (as a Church liaison to the independent lawyers) protested Viganò’s decision to stop the inquiry, Viganò told Church officials to destroy his memo.

[Rev. Dan Griffith] wrote that the ambassador’s order to call off the investigation and destroy evidence amounted to “a good old fashioned cover-up to preserve power and avoid scandal.”

What will Pope Francis do, especially since he and Viganò worked together for so long? (Sometimes, even Pope Who-Am-I-To-Judge has to make some judgment calls.)

It’s all the more disturbing when you realize what Viganò was covering up. The investigation in question was looking into former St. Paul and Minneapolis Archbishop John C. Nienstedt, who had promoted a priest, Curtis Wehmeyer, despite allegedly knowing that Wehmeyer abused children.

It never ends with these people, does it?

July 21, 2016The Daily Show Questions a Republican Pastor on Donald Trump's Christianity
Browse Our Archives
What Are Your Thoughts?leave a comment