Can Religion Solve Social Problems? Fewer Americans Than Ever Before Say Yes

Can churches and other places of worship provide meaningful solutions to social problems? A record number of Americans no longer believe it, reveals a new Pew poll.

The share of Americans who think that churches, synagogues, and other houses of worship contribute to solving crucial social problems is declining rapidly, according to a new study by the Pew Research Center.

In August 2008, 75% of Americans said that religious institutions and leaders contributed at least somewhat to solving societal problems. That percentage had fallen to 65% by July 2012, and further declined to 58% in the most recent survey. 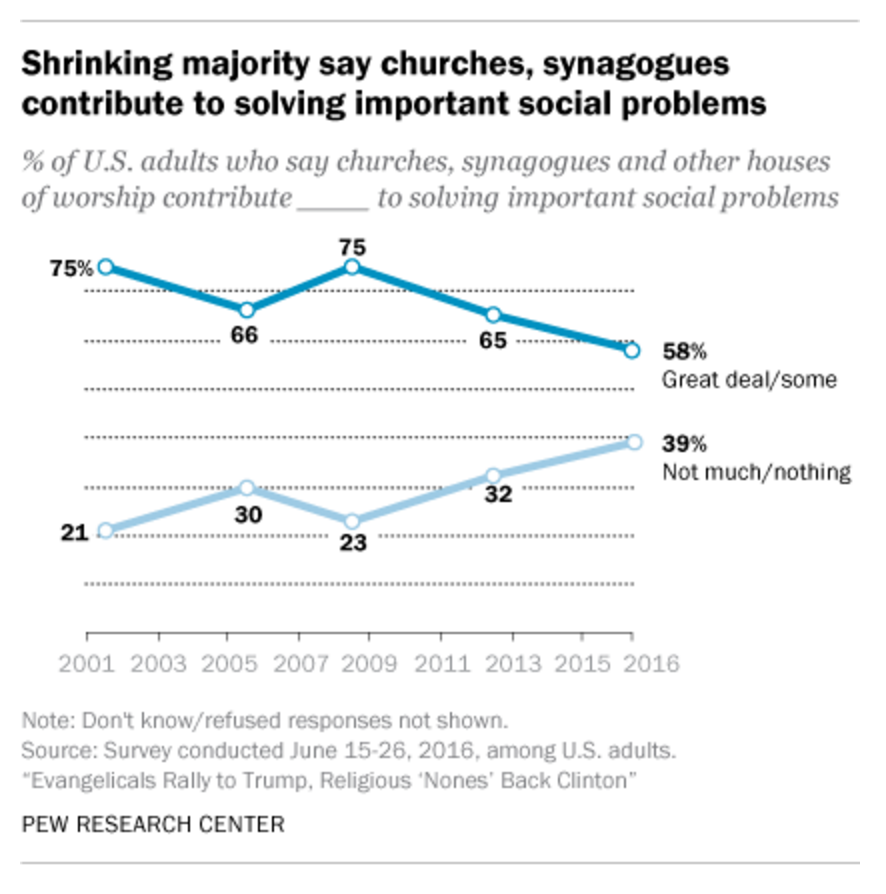 A seven-percent decline in just the last four years… A seventeen-percent drop over the last eight…  That’s massive. At this rate, by the year 2022, a majority of Americans will have stopped believing in the power of religion to help solve social problems.

The changing perceptions of Americans on the role of religion could be partially attributed to the growth in population of those with no religious affiliation. (Between 2007 and 2014, the percentage of Americans who described themselves as atheist, agnostic or “nothing in particular” rose from 16.1% to 22.8%, according to Pew research.) As might be expected, those with no religious affiliation are less likely to think that religious institutions play an active role in solving societal ills. Only 38% of the non-affiliated say that religious leaders and institutions make a contribution in this area, as compared with 65% of Protestants and 63% of Catholics.

But the rise of the nones doesn’t adequately explain what’s happening here.

The percentage of those who believe that churches help solve social problems has declined almost equally across age, religious belief, geographical location, and political affiliation. “It is striking just how broad-based this change is,” said [Greg] Smith [who is the deputy director of religion research at Pew Research Center, and one of the lead authors of the report].

So even lots of religious people have given up on pushing for social change through faith.

… doesn’t necessarily mean that activism itself is waning. In a 2015 opinion piece in the Washington Post, social activist Rahiel Tesfamariam pointed to the decentralized nature of movements like Black Lives Matter, and argued that modern activism in many cases no longer needs, or even desires, the imprimatur of churches.

July 21, 2016 Rocker Jack White's Next Project Involves Carl Sagan and Outer Space
Browse Our Archives
What Are Your Thoughts?leave a comment