Leave it to Christian Right leader Bryan Fischer to complain about one of the few bits of diversity seen on stage at the Republican National Convention.

Referring to Sajid Tarar, head of American Muslims for Trump, who delivered the closing prayers on Tuesday night, Fischer argued that Republicans had “collectively committed the sin of idolatry.” And then it got worse. 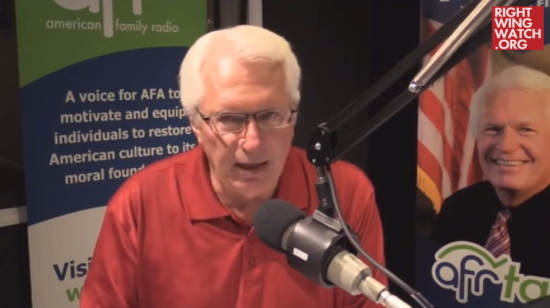 “The Republican Party last night allowed a demonic power to be invited into its building,” he said.

Fischer said Republicans at the event “collectively committed the sin of idolatry” by observing the prayer and committed a “dangerous” act by inviting “a demon-God into its party.”

“Multiculturalism, ladies and gentlemen, is simply a six syllable [word] for cultural suicide,” he continued, pleading with the party to “clean up this mess” by asking a Christian preacher to pray over the event.

1) Multiculturalism has seven syllables, not six.

2) There is no shortage of Christian preachers praying at this event.

3) Tarar gave a passing mention of “the Prophet Muhammad (peace be upon him)” in his address, but it wasn’t even in a reverent way. He used the generic “God” everywhere else. Hell, a Christian preacher could have given a prayer that was 99% identical to this one and no one would have noticed.

So what the hell is Fischer freaked out about?! It’s clear that he didn’t actually hear the prayer. He just knew the man was Muslim, saw the brown skin, and jumped to every negative conclusion he could come up with.

For Fischer, the Republican Party is merely an extension of evangelical Christianity and any deviation from that — even by way of token speakers meant to appeal to groups that want nothing to do with the GOP — is blasphemy.

July 21, 2016
A Christian Theme Park in Florida is Losing Money Fast
Next Post