Based on How the Jewish Year Is Written In Hebrew, It’s Clear the Messiah Is About to Arrive July 21, 2016 Terry Firma

Based on How the Jewish Year Is Written In Hebrew, It’s Clear the Messiah Is About to Arrive

How do you know the Jewish Messiah‘s long-awaited appearance is nigh? Because תשע”ו.

Last Saturday night, Rabbi Shalom Berger, the spiritual leader of the Mishkoltz sect of Hassidic Orthodox Jews, paid a visit to Rabbi Chaim Kanievsky, one of the leading rabbis of this generation. Rabbi Berger then asked Rabbi Kanievsky if it is true that this year is especially auspicious for the coming of the Messiah. Rabbi Kanievsky answered without hesitation. “Of course, the year, 5776, in Hebrew letters (תשע”ו‎) spells ‘salvation’ (תשוע).” 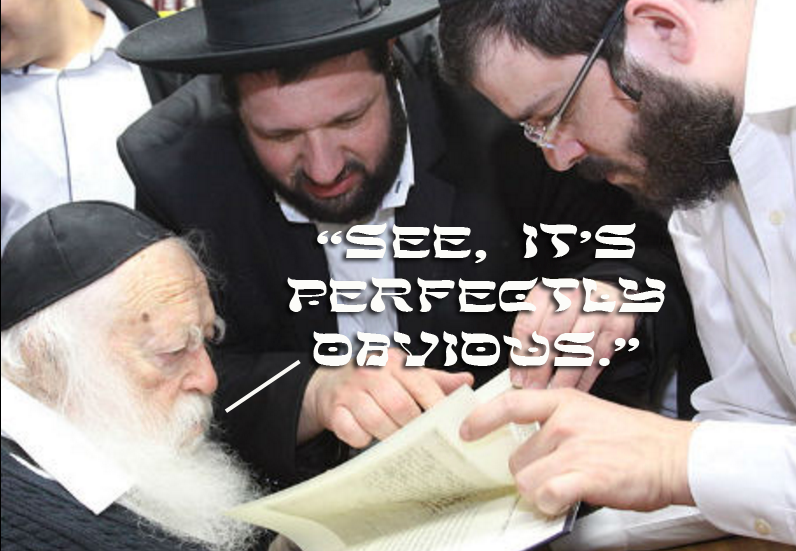 Never underestimate the predictive power of squiggles! In any alphabet, letters and numbers, and how they’re written and in what order they appear, hold the key to the future! This is well known.

Breaking Israel News spoke to Rabbi Yosef Berger, the son of Mishkoltz Rabbi Shalom Berger and the rabbi of David’s Tomb in Jerusalem, about Rabbi Kanievsky’s declaration. Rabbi Yosef was by his father’s side when the two Torah greats spoke.

Rabbi Yosef told Breaking Israel News, “It is generally accepted that Rabbi Kanievsky is on a high spiritual level approaching prophecy, what Jewish scholars call ruach hakodesh (holy spirit). He has been speaking about Messiah this year in a way he has never done before.”

Then again, two years ago, according to this source, the rabbi was also

… speaking about Mashiah all the time.

But this time he means it!

I trust it’s not too shocking to learn that Kanievksy has been at this for a while. He’s to Judaism what Harold Camping was to Christianity. Kanievksy predicted — inaccurately, if you can believe that — that the Messiah would grace us with His presence back in 2011 and again in 2015.