These “Trump Tracts” Will Help You Find Your Inner Salvation July 20, 2016 Hemant Mehta

These “Trump Tracts” Will Help You Find Your Inner Salvation

Artist Ethan Persoff created “Trump Tracts” that are similar to those Christian “Chick Tracts” you often see handed out on college campuses.

Once you read them, you’ll feel an overwhelming sense of peace. 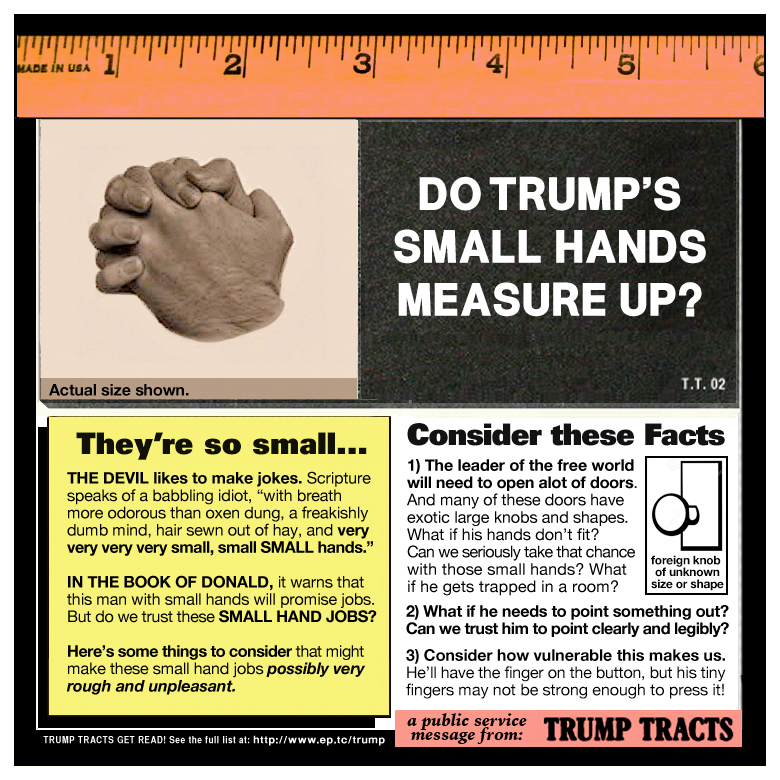 Who knew achieving salvation was an easy as not voting for the guy with an “R” next to his name on Election Day?

There are four tracts already published (with more on the way): Church of the Sub-Doofus, Do Trump’s Small Hands Measure Up, Broke at Birth, and The GOP World is Ending.

July 20, 2016 A Rabbi's Speeding Tickets Are Quashed; Is This Moth Story Supposed to Be Cute?
"You haven't been to Alabama yet."
K. Ramsuer A Texas Newspaper Published an Essay ..."
"Lock her up!Lock her up!Lock her up!Oh, wait.. https://uploads.disquscdn.c..."
Jim Jones E.W. Jackson: God, Please Let Biden ..."
"Is this the 'escape hatch' he was talking about? The one he plans on using ..."
NOGODZ20 MAGA Cultist Pastor: The COVID Relief ..."
"https://uploads.disquscdn.c..."
CanuckAmuck A Texas Newspaper Published an Essay ..."
Browse Our Archives
What Are Your Thoughts?leave a comment