If Only the Folks at NASA Had Read the Bible…

I don’t know why NASA bothers sending spacecraft to learn about other planets, especially when the missions are all about learning how those planets formed. The answers are right in front of us.

Or at least that’s what Marvin McFaddin told the Lexington Herald-Leader in a letter-to-the-editor: 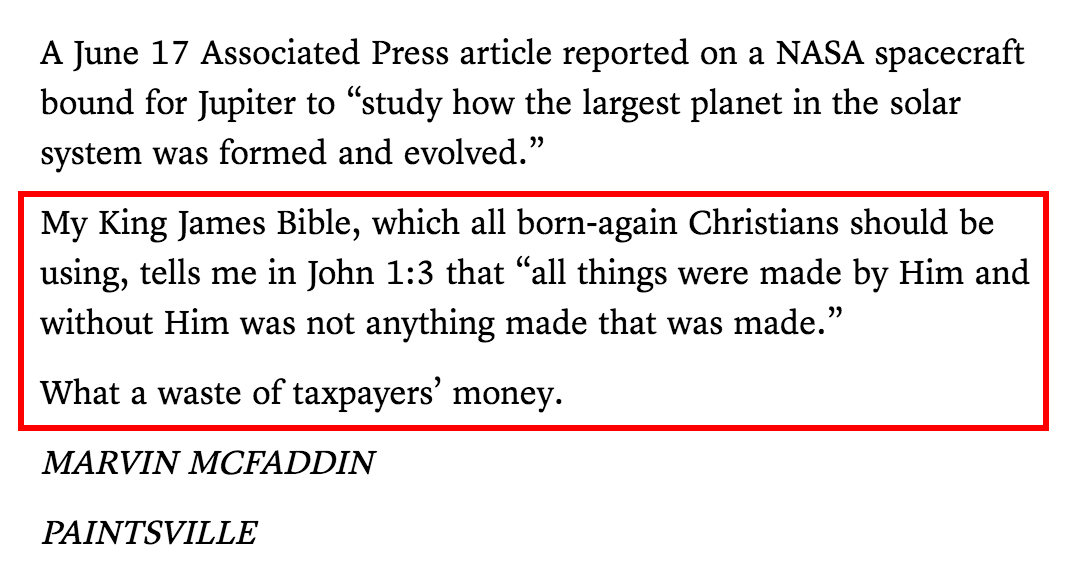 My King James Bible, which all born-again Christians should be using, tells me in John 1:3 that “all things were made by Him and without Him was not anything made that was made.”

What a waste of taxpayers’ money.

God said it. He believes it. That settles it. Evidence and curiosity be damned.

By his logic, we also shouldn’t bother with science class… or ancient history, since it didn’t exist according to Genesis… or English, since there’s only one book that matters… Seeking knowledge is pointless when the answers are right in front of you! Just read and accept and obey.

July 20, 2016
A Puppet Explains Why You Should Vaccinate Your Kids
Next Post

July 20, 2016 Analysis Shows Trump Supporters Love God's Not Dead (and Some Think Kirk Cameron's a Great Actor)
Browse Our Archives
What Are Your Thoughts?leave a comment