If you were to visit the Bryan County courthouse in Georgia, you’d see this flag in one of the courtrooms: 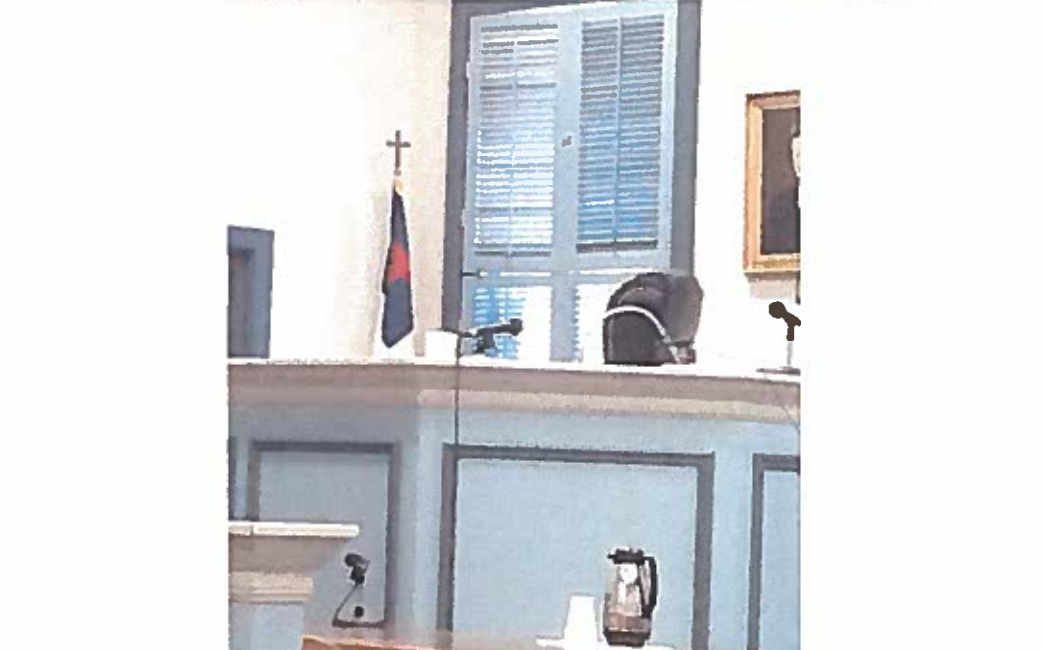 It’s a traditional Christian flag — no one doubts that — and the Freedom From Religion Foundation sent them a letter about it earlier this month:

“An overwhelming majority of federal courts agree that the Latin cross universally represents the Christian religion, and only the Christian religion,” FFRF Staff Attorney Elizabeth Cavell writes to Rebecca Crowe, Bryan County clerk of courts. “And a majority of federal courts have held displays of Latin crosses on public property to be an unconstitutional endorsement of religion.”

The cross and the flag display in the Bryan County courthouses unabashedly creates the perception of government endorsement of Christianity, FFRF asserts. Plus, it sends a message to the nearly 30 percent of non-Christians (including the one-fourth of the population that is religiously unaffiliated) that they are not “favored members of the political community,” to quote the U.S. Supreme Court.

Whenever FFRF sends these letters, you never know how the staffers will respond. Will they do the right thing and take down the flag? Or will they put up a fight, wrongly claiming their religious freedoms are under attack?

Believe it or not, Crowe did the right thing. Albeit very reluctantly and only at the advice of the county attorney.

Crowe said Tuesday morning that she referred the letter to Leamon Holliday, the county’s attorney, who in turn recommended the flag be removed to avoid potential litigation.

“We are reluctantly going to do that,” Crowe said.

Crowe later commented on the Bryan County News Facebook page, stating: “When I forwarded the letter to Mr. Holliday I advised him I was against this and if anyway possible I wished to keep the flag in the courtroom. Unfortunately, it’s unconstitutional to have this flag displayed in a government setting. As much as I am against it, I do not wish to cause the taxpayers unnecessary expense in litigation.“

It’s the right move. And just to state the obvious, there’s no reason she can’t have the flag in her home, in her car, or practically anywhere else that’s not the courtroom or some other public space.

This ought to be common sense by now. It’s amazing we keep hearing about these stories, year after year.

July 20, 2016
This Is An Unusual Way to Advertise Your Car Dealership. But It Is Tennessee...
Next Post

July 20, 2016 Ted Cruz, in Convention Speech, Talks About Protecting Religious Freedom of Atheists. Seriously.
"Sack the script writer."
Philip Buczko Called Out for Anti-Semitic Stereotypes, TV ..."
"And that was one of the reasons the age was lowered to 18. Because of ..."
phatkhat MAGA Cultist: “I’ll Admit It. I ..."
""metal band"I always preferred "a ring through the nose" myself. Less opportunity for confusion."
Mike Meredith Judge Tosses Lawsuit Saying Divorce Violates ..."
"I wished you would have been around when I was school, because the majority of ..."
Pattyrealdeal After Baptist Pastor Tells Wives to Lose ..."
Browse Our Archives
What Are Your Thoughts?leave a comment