When atheists protested at the opening of Ark Encounter in Kentucky, they were counting on Five Star Septic and Portable Toilet Rentals (one company) to deliver the portable toilets they needed for the demonstration. After all, it was going to be very hot and there were no restrooms nearby. The company agreed to the rentals a week before the event. 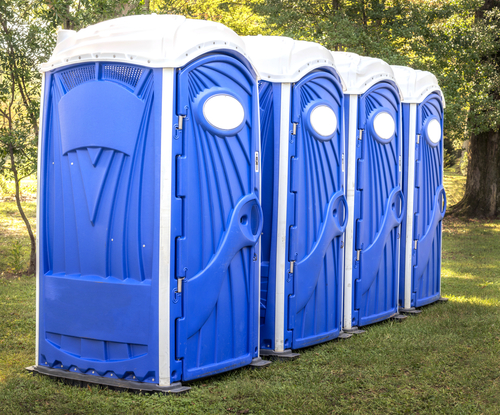 But things took a bad turn that morning:

… when the company’s office called Tri-State Freethinkers to get directions to the site, it asked the organization representative whether the portable toilets were for the protest. Upon learning that they were, the office denied service, indicating that this was partially because it did not want its name associated with the atheists’ protest.

With such short notice, Tri-State Freethinkers had to hastily organize a shuttle caravan to a nearby gas station for the nearly 200 attendees needing to use toilets. This entailed a major time expense for volunteer organizers and individuals needing the ride, as well as financial outlay for gas and mileage. For some individuals, the inconvenience caused by the breach of contract meant missing parts of the protest.

Somehow, a company that deals with shit lived up to its name.

The Freedom From Religion Foundation sent a letter to the company a week later:

The Civil Rights Act prohibits discrimination in “places of public accommodation,” and as you are a company that provides commodes, it seems as though that term of art is directed at you.

[Tri-State Freethinkers] detrimentally relied on your promise to deliver a service and you reneged on that promise. At the very least, this is a breach of contract.

Tri-State Freethinkers will be contacting you to discuss an appropriate remedy for this discrimination.

That may have done the trick. FFRF received a response from the parent company saying this wouldn’t happen again and returning the money the atheists had spent on their rental:

… Arwood Waste & Demolition, with which Five Star Septic has been a subcontractor, said sorry to Tri-State Freethinkers and made a pledge that the inappropriate behavior will not recur.

“Sir, I do apologize for services having been refused to your organization by our affiliate company (Five Star Septic),” Michael Nancarrow, Arwood’s associate director of communications, emailed Jim Helton, the president of Tri-State Freethinkers. “I want you to know that this does not in any way reflect the values of Arwood Waste and, as such, certain measures will be taken to ensure that this kind of thing does not happen again. There will be no charges made to the MasterCard provided to Arwood Waste.”

Helton was also assured by another company official that Arwood would not be using Five Star Septic as a subcontractor in the future.

Given that we can’t go back in time to fix the situation and there’s no protest planned in the future, it’s the right response from Arwood.

What amazes me is that the company seriously denied providing service to atheists because they didn’t want to be associated with the protest. As if anyone was going to punish a porta potty company for renting out units to atheists. It makes even less sense than Christian bakers who won’t make cakes for same-sex weddings because they don’t want to be part of the ceremony.

You’re not. You’re just providing a service and then you can leave. No one cares who you are.

Not a single atheist was going to leave the protest giving any thought to the portable toilets. But by not providing service, the company made sure they were linked in the media to the very group they didn’t want to work with. So I guess that plan backfired.

July 19, 2016
A Five-Year-Old Explains How Hurricanes Work
Next Post