While a storm was passing through Kentucky, Creationist Ken Ham used the opportunity to learn all about Pokémon Go from some of his staffers.

But as anyone who’s plays the game knows, a big part of it involves evolving the creatures.

That led to this remarkable exchange in which Ham tried to understand what the hell that means: 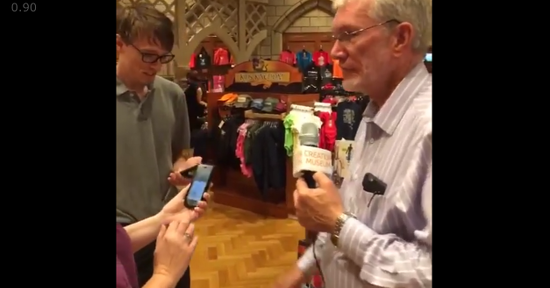 HAM: Now you said something in my office this morning — you nearly got thrown out — when you used the word “evolve”… What did you tell me about Pokémon and evolve?

HAM: What is that?

STAFFER: Apparently, you give them candy and they become stronger.

HAM: So they evolve.

HAM: … That’s no good for the Creation Museum.

STAFFER (laughing): It doesn’t take millions of years, though.

HAM: So is that evidence against evolution or…? So Pokémon evolves…

A minute later, Ham evolved a creature for himself:

STAFFER: You want to try to evolve one?

HAM: I don’t believe in evolution… Okay, so what do you do?

STAFFER: The bird is evolving.

STAFFER: It has evolved into a bigger, better bird, apparently.

There you have it. Even in Pokémon Go, the creatures never turn into different species and it happens in a matter of seconds. Checkmate, Darwin!

I realize this is all supposed to be tongue in cheek, but Ham’s comments aren’t a joke. He sincerely believes this nonsense.

Side note: At one point, Ham looks at everyone playing the game in the Creation Museum and says, “People are out there running around, chasing little non-existent things.”

That also doubles as a perfect description of everyone who works there.

July 19, 2016
Hillary Clinton Should Be Doing More To Connect With Non-Religious Voters
Next Post