Republicans adopted their party’s official platform yesterday, setting in stone what the GOP now stands for. While there’s a lot to object to, below are the issues that seem to come straight out of evangelical Christian talking points, along with the sections in which they appear.

It’s not all that surprising to see these in print when you realize that Christian pseudo-historian David Barton and hate group leader Tony Perkins were both members of the Platform committee. 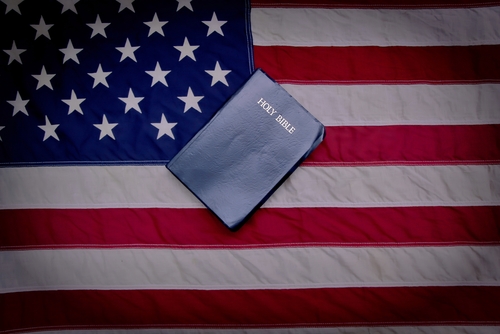 We condemn the Supreme Court’s ruling in United States v. Windsor, which wrongly removed the ability of Congress to define marriage policy in federal law. We also condemn the Supreme Court’s lawless ruling in Obergefell v. Hodges, which in the words of the late Justice Antonin Scalia, was a “judicial Putsch” — full of “silly extravagances” — that reduced “the disciplined legal reasoning of John Marshall and Joseph Storey to the mystical aphorisms of a fortune cookie.” In Obergefell, five unelected lawyers robbed 320 million Americans of their legitimate constitutional authority to define marriage as the union of one man and one woman.

The Obergefell decision left churches and individuals with the ability to define marriage however they wish. There have been zero instances of pastors having to officiate a gay wedding against their will.

… many charitable religious institutions that have demonstrated great success in helping the needy have been barred from receiving government grants and contracts. Government officials threaten religious colleges and universities with massive fines and seek to control their personnel decisions. Places of worship for the first time in our history have reason to fear the loss of tax-exempt status merely for espousing and practicing traditional religious beliefs that have been held across the world for thousands of years, and for almost four centuries in America. We value the right of America’s religious leaders to preach, and Americans to speak freely, according to their faith. Republicans believe the federal government, specifically the IRS, is constitutionally prohibited from policing or censoring speech based on religious convictions or beliefs, and therefore we urge the repeal of the Johnson Amendment.

It’s all bullshit. The majority of these issues are and always have been about taxpayer-sanctioned discrimination. Should a public university reward a Christian student group that bars gay leaders? Can taxpayer-supported Catholic adoption agencies discriminate against gay parents? And the last issue goes to the heart of whether tax-exempt organizations, like churches, should be allowed to make political endorsements. Repealing the Johnson Amendment would allow every evangelical church in America to become an extension of the Republican Party.

We support the public display of the Ten Commandments as a reflection of our history and our country’s Judeo-Christian heritage and further affirm the rights of religious students to engage in voluntary prayer at public school events and to have equal access to school facilities.

Republicans want public schools to put up monuments that say things like “Thou shalt have no other gods before me” and “Thou shalt not make unto thee any graven image.” The education value of that hasn’t been explained.

We support the ability of all organizations to provide, purchase, or enroll in healthcare coverage consistent with their religious, moral, or ethical convictions without discrimination or penalty. We support the right of parents to determine the proper medical treatment and therapy for their minor children.

It doesn’t say it explicitly, but this section supports harmful, unscientific, and widely derided “conversion therapy” for gay people. “Praying away the gay” is basically a GOP plank.

We oppose the use of public funds to perform or promote abortion or to fund organizations, like Planned Parenthood, so long as they provide or refer for elective abortions or sell fetal body parts rather than provide healthcare. We urge all states and Congress to make it a crime to acquire, transfer, or sell fetal tissues from elective abortions for research, and we call on Congress to enact a ban on any sale of fetal body parts.

This second on “Protecting Human Life,” ironically coming shortly after the part about the right to bear arms so they can shoot people, exaggerates reality. Withholding federal funds from Planned Parenthood would have a drastic effect on women’s health since the group provides breast exams, cancer screenings, and contraception. Furthermore, it’s a lie than Planned Parenthood is selling fetal tissue; They sometimes donate it for research purposes and get reimbursed for shipping/handling, and this is research that (again) will help people down the line.

Education: A Chance for Every Child

A good understanding of the Bible being indispensable for the development of an educated citizenry, we encourage state legislatures to offer the Bible in a literature curriculum as an elective in America’s high schools.

This isn’t necessarily a bad idea. But as we’ve seen all too often, Bible-as-literature courses often serve as ways for the Religious Right to sneak in their own ideology.

Foremost among those institutions is the American family. It is the foundation of civil society, and the cornerstone of the family is natural marriage, the union of one man and one woman… everyone should be concerned about the state of the American family today, not because of ideology or doctrine, but because of the overwhelming evidence of experience, social science, and common sense. All of which give us these truths about traditional marriage: Children raised in a two-parent household tend to be physically and emotionally healthier, more likely to do well in school, less likely to use drugs and alcohol, engage in crime or become pregnant outside of marriage.

If that’s a dig on gay couples, it’s a failed one since no credible evidence supports what they’re saying. Just as with studies that suggest religious people are emotionally healthier, the issue isn’t religion/tradition at all; it’s the way we treat people who are outside the “club.” When gay parents are demonized by conservatives, it’s no wonder children of gay parents suffer some of the consequences. This isn’t an argument against gay marriage. It’s an argument against religious bigotry.

Pornography, with its harmful effects, especially on children, has become a public health crisis that is destroying the lives of millions. We encourage states to continue to fight this public menace and pledge our commitment to children’s safety and well-being. We applaud the social networking sites that bar sex offenders from participation. We urge energetic prosecution of child pornography, which is closely linked to human trafficking.

That same provision of law is now being used by bureaucrats — and by the current President of the United States — to impose a social and cultural revolution upon the American people by wrongly redefining sex discrimination to include sexual orientation or other categories. Their agenda has nothing to do with individual rights; it has everything to do with power. They are determined to reshape our schools — and our entire society — to fit the mold of an ideology alien to America’s history and traditions. Their edict to the states concerning restrooms, locker rooms, and other facilities is at once illegal, dangerous, and ignores privacy issues. We salute the several states which have filed suit against it.

If being transgender means you’re part of an “ideology alien to America’s history and traditions,” it’s only because Americans have ignored or dismissed it for so long. Laws allowing trans people to use the appropriate bathrooms hurt nobody. Christian conservatives, as usual, have to resort to fictional fears to scare people from treating trans people with dignity and respect.

As usual, the best thing Republicans have going for them is that most people will never read the platform, Donald Trump included. What’s stunning is that there are atheists who will look at all this and still conclude that the GOP is the party that has their best interests at heart.

(Image via Shutterstock. This article was updated to include the bit about “conversion therapy.”)

July 19, 2016
Floridians Rebel Against Mosque Polling Place Despite Many Churches Serving the Same Function
Next Post

July 19, 2016 Hillary Clinton Should Be Doing More To Connect With Non-Religious Voters
"All it means when someone who can never get pregnant says is he wants to ..."
San_Ban U.S. Bishops Move Forward with Plan ..."
"$25,000 per month at $84 per hour - that's 294 hours of work per month. ..."
CirrusClown Podcast Ep. 379: A Christian Baker ..."
"Thank goodness war and the death penalty and mass shootings have all been solved, and ..."
Nomad U.S. Bishops Move Forward with Plan ..."
"I don't think virtue requires them to be celibate or anything. Consensual sex is fully ..."
Nomad Podcast Ep. 379: A Christian Baker ..."
Browse Our Archives
What Are Your Thoughts?leave a comment