It’s always tough to figure out how to raise a children when the parents are separated and have different religious beliefs. For a couple in Gibraltar, the conflict involved a Roman Catholic mother and an atheist father. They agreed to expose the child to their respective beliefs and leave it at that. 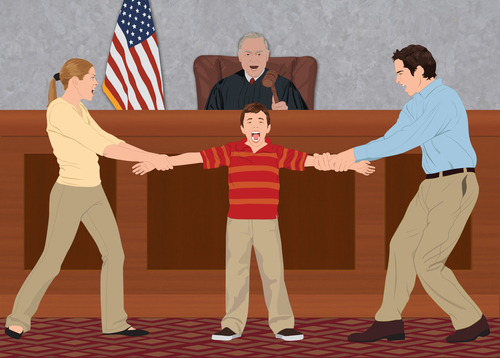 But the mother recently arranged to get her son baptized without consulting the father. Now what?

This case made it all the way to the Supreme Court of Gibraltar (which sounds more impressive than it really is), where a judge ruled in favor of the father — in other words, the mother could not baptize the son as she wished:

My order is that the mother be prohibited from causing or allowing [child] C to be baptised without the written consent of the father or further order of this Court but that she be otherwise free to involve C in any and all religious and family ceremonies and to introduce C into her faith and beliefs.

Here’s the rationale for that decision:

[The father] has the legitimate view that, whilst he would not stand in the way of [child] C’s involvement and participation in the Christianity practised by the mother and her family, C should not feel, when he comes to make his decisions, that they have already been made for him. He will be less open to alternatives, including his father’s opinions. He might feel that having been baptised he would be rejecting the faith chosen for him rather than simply choosing not to follow his maternal family’s lead.

That’s an interesting and possibly controversial statement, saying that the symbolic act of baptism is a bridge too far for a four-year-old child who should be allowed to make up his own mind about religion. If the mother wants to take him to church and expose him to her faith, that’s fine, but taking a step — without the father’s consent — to make the child a member of that church in a spiritual way is a no-no.

(Is there an atheist equivalent of that? At what point would an atheist parent be said to have gone too far?)

The judge noted that his decision only applies in this particular case; it’s not precedent for anything. He also offered this reasonable advice to the parents:

I emphasise too my hope that as C grows up his parents will be able to encourage him to make his own choices. That does not mean that they should not express their own views and beliefs and faiths, provided that they do so sensitively and without denigrating those of the other parent. The father may become more mellow as time passes by. Even if C is still young, it may be that if he expresses a real wish to follow, embrace and be part of his mother’s faith the father will give him full permission and assistance as appropriate. There should be no element of competition between the parents for C’s mind. C’s life should never be regarded as a matter of winning or losing as between his parents.

Those are some wise words in an otherwise unusual case.

July 19, 2016 Ben Carson: Hillary Clinton Can't Be President Because She Worships Lucifer
Browse Our Archives
What Are Your Thoughts?leave a comment