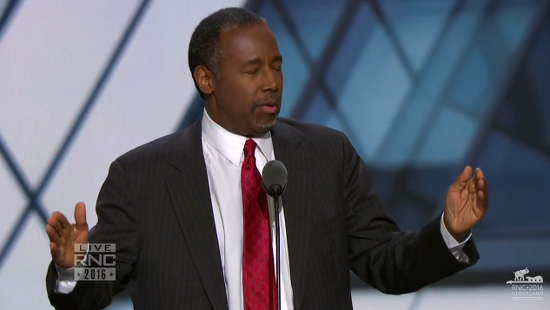 I don’t have time to rebut every lie he said, but let me go over the most ridiculous part since it has a lot of red meat for readers of this site. It begins around the 4:10 mark of the video.

… One of the things that I have learned about Hillary Clinton is that one of her heroes, her mentors, was Saul Alinsky.

And her senior thesis was about Saul Alinsky.

This was someone that she greatly admired and that affected all of her philosophies, subsequently. Now interestingly enough, let me tell you something about Saul Alinsky. He wrote a book called Rules for Radicals. On the dedication page, it acknowledges Lucifer, the original radical who gained his own kingdom.

That’s some tortuous logic right there.

Clinton wrote a thesis about a guy… who wrote a book… and referenced the Devil in a sarcastic way… therefore, Hillary worships the Devil!

It’s also ironic that Carson accused Clinton of worshiping the Devil when, last month, Donald Trump was questioning whether she believed in God at all. Since those are two sides of the same coin, does she believe in supernatural beings or not? Republicans hell-bent on discrediting her should make up their damn minds.

(You know who genuinely believed in the existence of the Devil? GOP hero, the late Supreme Court Justice Antonin Scalia.)

Then we have the factual errors. Our Pledge may include the phrase “Under God,” but that was only jammed through in 1954 in response to the threat of “godless Communists.” It wasn’t like that when the Pledge was written (long after our nation was founded, by the way).

What about “In God We Trust” on our coins? That started in 1864, but it wasn’t on the currency until 1957 — also in response to the Communist scare.

The point is: You can’t insinuate that this is a Christian nation just because Christians put Godly phrases on money and the Pledge when they had the chance.

Carson’s speech was ridiculous, but that passage was emblematic of the lengths many Republicans will go to in order to smear Clinton. It’s pathetic.