I think I can speak for the rest of society when I say, “Cry me a goddamn river.” 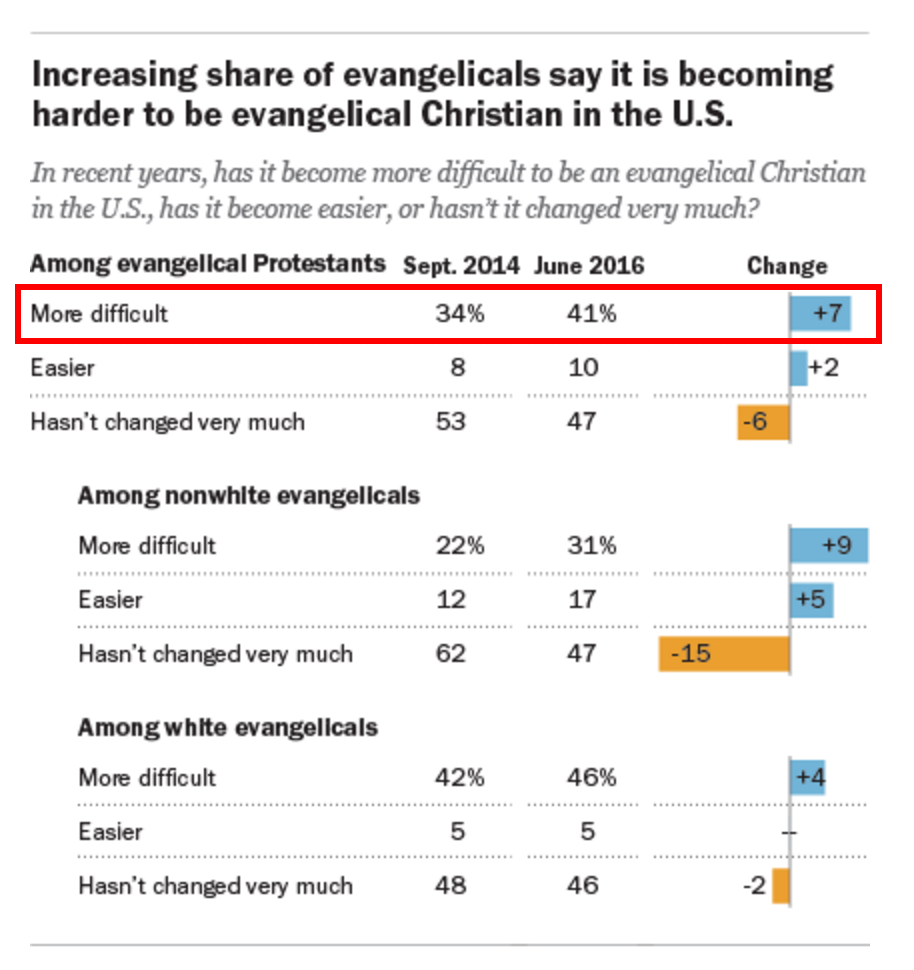 Two years ago, 34% of evangelicals thought it was hard being them. That number has now gone up to 41%. (In case you’re wondering, non-religious Americans and Catholics saw virtually no change over the past two years when asked if it’s harder being them.)

Pew’s Michael Lipka offers this possible explanation for why evangelicals feel this way:

Some of this feeling may stem from the fact that the country is becoming more secular: A rising share of Americans do not identify with any religion, while a shrinking portion of the population is Christian. Another factor may be the spread of legal same-sex marriage nationwide and increasing social acceptance of homosexuality, developments with which many conservative Christians disagree. And other clashes with the values many conservative Christians hold continue to play out across the country, whether it be over the teaching of evolution in public schools, the presence of religious displays on public property for Christmas or whether public school cheerleaders can put Bible verses on their banners.

To look at this information another way, it’s not harder to be an evangelical Christian. They still have their churches. They’re still in the majority. They still walk the halls of Congress. They still have political candidates pandering to them.

What’s changed is that the rest of us refuse to be silent when their abhorrent beliefs cross the line into public policy. When they try to force their views on the rest of us — whether it’s opposing LGBT rights, promoting Christianity through schools and government, or ruining science education — we’re going to fight back. They’re welcome to believe in bullshit, and no one’s going to stop them from celebrating their ignorance every week in church.

But our society is diverse enough and organized enough to finally push back against the Christian majority when we have to.

The only reason evangelicals think it’s more difficult to be themselves is because, for a long time, no one challenged them on their ideas. It’s happening more regularly now — and it’s a good thing, too. The facts just don’t back up the things they then to say about abortion, civil rights, science, and non-religious people — not to mention Jesus, miracles, and Hell.

We need to make it even more difficult for them. No one’s stopping them from being Christians, but people with bad ideas should feel like everyone is against them. It means the better ideas, backed up by reason and evidence, are winning out.

July 19, 2016 Why Do Evangelicals Support Donald Trump? Pot, Meet Kettle
"Hmm, why don't they turn to prayer?"
Jezebel'sOlderSister Why is FEMA Giving a Church $2 ..."
"I am pro vaccination. I find the parents refusing to vaccinate thier kids to be ..."
alconnolly Connecticut House Passes Bill Removing Religious ..."
"This cartoon made me think.I've had skype or zoom meetings with people in other countries ..."
smrnda Anti-Mask Flat Earther Says Government Kidnapped ..."
"Audit ordered by the GOP-controlled state senate, executed by a private Florida-based company and supported ..."
NOGODZ20 Anti-Mask Flat Earther Says Government Kidnapped ..."
Browse Our Archives
What Are Your Thoughts?leave a comment