On Twitter, Many Are Celebrating the “Honor Killing” of Qandeel Baloch July 18, 2016 Hemant Mehta

On Twitter, Many Are Celebrating the “Honor Killing” of Qandeel Baloch

In all the talk about “Pakistan’s Kim Kardashian” Qandeel Baloch and how her brother murdered her in an “honor killing,” there’s one aspect of the story I didn’t realize: Just how many people online are celebrating her death. 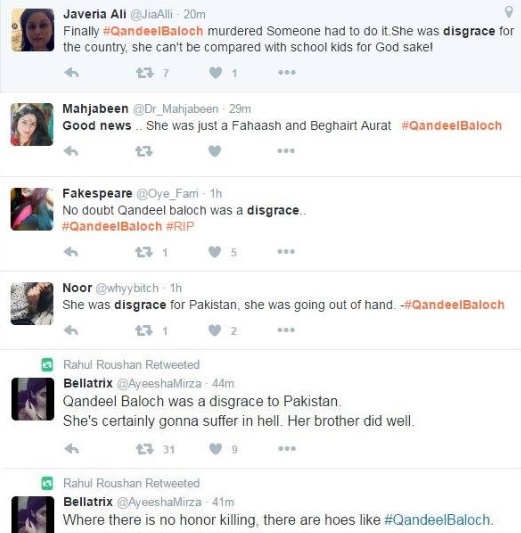 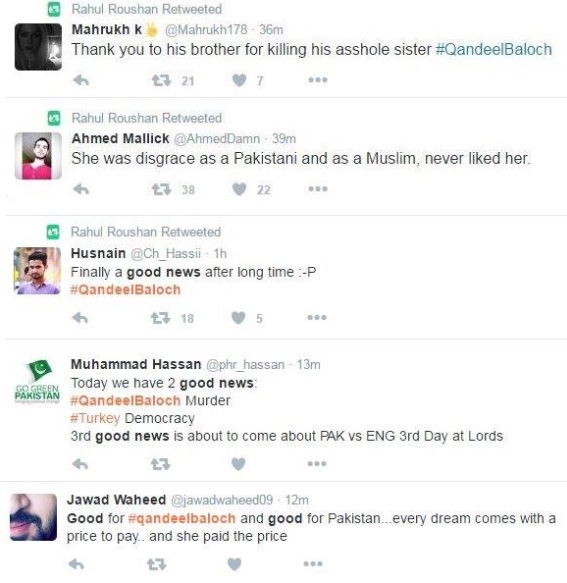 In an incredibly powerful piece at The Ex-Muslim, Hiba Krisht writes about how she was once in a similar situation: “Make no mistake that I could have very easily shared Qandeel Baloch’s fate once, except you’d not have heard of what was done to me.”

She reflects on just how serious this problem is:

What is most grieving is the sheer scale of this.

Her videos and photos on social media have literally thousands of death and rape threats in the comments. A bare two weeks before her death she publicly asked for security and protection from Pakistani Interior Minister Chaudhry Nisar because of these staggering death threats.

And now she is dead.

Really look at the #QandeelBaloch hashtag or go to her most recent posts on the Qandeel Baloch official Facebook page and you can’t count or stomach how many are condemning her in death and celebrating her murder. And that’s what we see, in English. What is being said and its scale on non-English local Pakistani twitter/social media is invisible to us outsiders too.

The problem transcends anything manageable by condemning or reporting individuals. These sentiments, they are reflections, symptoms of the larger problem.

No one deserves to be killed for having the courage to buck social norms. That sounds so obvious… until you realize just how many people believe murder is an acceptable consequence for violating tradition.

Be sure to read Hiba’s full piece here.

July 18, 2016
A Christian Extremist Shot a Trans Woman In the Face, but Indiana Doesn't Call That a Hate Crime
Next Post