Joshua Feuerstein: If You Threaten a Cop, “I Will Shoot You Dead,” Just As Jesus Told Me To July 18, 2016 Hemant Mehta

Joshua Feuerstein: If You Threaten a Cop, “I Will Shoot You Dead,” Just As Jesus Told Me To

After the horrific deaths of five cops in Dallas earlier this month and three more this weekend in Baton Rouge, it should go without saying that no decent person is celebrating what happened. Those officers were doing their jobs. They were keeping the peace. And they were killed for no reason other than misplaced outrage at the hands of two deranged individuals.

Anyone who blames the Black Lives Matter movement for the officers’ deaths really doesn’t understand what that movement stands for. (It’s non-violent, to say the least.)

One person who refuses to accept that reality is Joshua Feuerstein, the online Christian evangelist who, as usual, promoted his ignorance in a vertical video and took it up a notch by showing how he would kill anyone who pulled a gun on a cop. 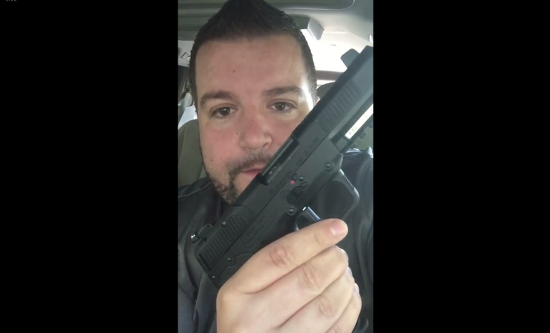 … You want to know what the problem is, is that we have this movement in America that is absolutely degrading the lives of good police officers. And… I was raised in a home where we respected police… Today, we’ve got kids that are growing up in these different homes where the parents are not respecting police or cussing them out and callin’ ’em pigs, telling kids not to trust ’em. That’s the problem!

That’s the sound of a white man who’s never spoken to a black person before.

If he had, he’d understand why there’s distrust of police officers among that community. When you get pulled over despite doing nothing wrong, or punished for the same crimes others commit but receive harsher punishments, or killed for petty “crimes” that barely warrant a punishment (and know damn well that if it’s not caught on camera, few people will ever care), you understand that there’s something wrong with the system. Of course there are good cops out there. No one’s saying there aren’t. But it’s telling that so many of the white cops who were seen killing black people, even when there was no justification for that much force, were let off the hook.

The problem isn’t that people don’t respect police. The problem is that many cops, when they’ve killed people for no rational reason, have been able to escape punishment for their actions. Black Lives Matter, and that movement’s allies, just want some justice. They want people to acknowledge what they’ve been through, and they want to see police take these issues seriously instead of turning a blind eye when their colleagues are part of the problem.

But Feuerstein, immune to critical thought, knows exactly what’s to blame for this lack of authority: Not enough Jesus.

We’re fostering a generation of people who no longer have respect for authority. It’s a godless and a disgusting generation.

If he’s still talking about black people, he should recognize that more than 95% of African-Americans believe in God. (Way more than white people.)

But if that’s not what he’s referring to, then it’s still a strange reference. It’s not like anyone is killing cops in the name of Richard Dawkins. “Godless” is just one of those buzzwords Christians love to throw out when they have nothing reasonable to say. We’re an easy target and the G-word always gets a reaction from an evangelical crowd.

Then there’s the kicker. Feuerstein waves around his weapon and proclaims that he’ll murder you if you dare to pull a gun on a cop. As if he’s a superhero who’s just waiting for a moment that rarely happens. As if the cops can’t handle the situation without Feuerstein’s help.

Look, I’m calling on every American citizen — I love Jesus. I love Jesus. I’m a preacher, but you know what? I also carry an FN Five-seven. Filled with 20 rounds of pure brutality right there.

Look. I may love Jesus but if I see you pull a gun on an officer, you want to know whose side I’m on? That’s right. I’m gonna fill you with 60 rounds of pure lead. And I guarantee you you’re gonna have lead poisoning.

Look guys, it’s time that we as Americans, we as Christians — we’ve gotta start carrying guns. Because we gotta protect our superheroes.

The FN Five-seven is known as a “cop killer” gun. I have a hunch that if you surveyed police officers and asked them whether or not they’d feel better in a dangerous situation knowing that Josh Feuerstein’s walking around with a weapon that could penetrate their armor, they’re going to lean towards “No.”

Even besides that, though, it’s disturbing to hear Feuerstein bragging about how anxious he is to kill someone.

It’s the wet dream of a lot of gun owners, isn’t it? When the bad guys try to cause havoc, the good guys will save the day! Even though such stories are rare… and even though we’ve seen several cases recently where cops were present at the site of a mass shooting and just couldn’t do enough to prevent the chaos. If they couldn’t stop the killings, what makes Feuerstein so confident?

Hell, I doubt he’d be very useful since, as soon as he sees the bad guy, he’d have to pause for a few seconds to set up his phone camera. (Because if it’s not on video, how will he get more Facebook likes?!)

But there you have it: Being Christian isn’t about accepting Jesus and receiving salvation. You just have to put on your macho voice, throw away your critical thinking skills, and let the world know you’re a violent buffoon. (And don’t you dare turn your phone the other way. Jesus hates that.)

I didn’t know I’d ever long for the day Feuerstein’s biggest problem was nothing more than a red cup at Starbucks. Then again, he pulled out his gun when he was whining about that, too.

July 18, 2016
Here’s a Cringe-Worthy "Hotline Bling" Parody That's Supposed to Make You Want to Come to Church
Next Post