Jehovah’s Witness Mother Sends Break-Up Card to Daughters: “Do Not Call Me. This is Non-Negotiable” July 18, 2016 Hemant Mehta

Jehovah’s Witness Mother Sends Break-Up Card to Daughters: “Do Not Call Me. This is Non-Negotiable”

When discussing the Jehovah’s Witness policy of Disfellowshipping — where those who leave the faith are effectively shunned by the entire JW community — we’ve posted text messages between family members who refuse to speak to each other and a story about a JW who won’t even speak to her dying ex-JW mother. And that was just this month.

But Lloyd Evans directed me to cards written by one mother to her two daughters. They weren’t even technically Disfellowshipped; they just stopped attending JW meetings. But that was enough for the mother to cut her ties with them.

The letters are identical and some of the excerpts are below: 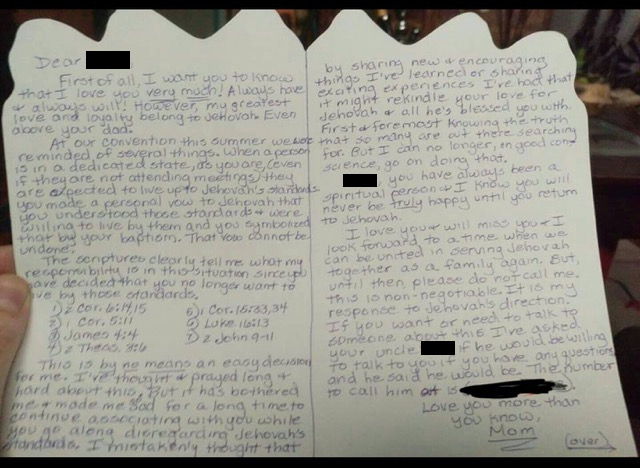 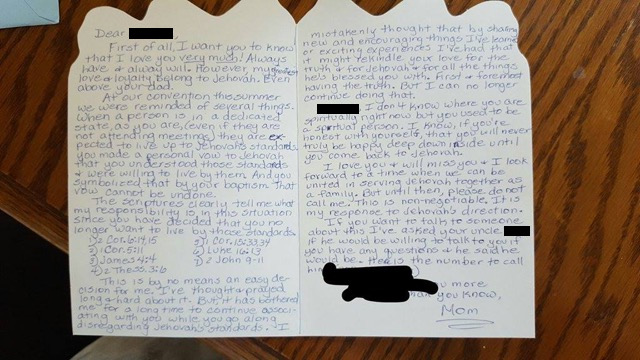 First of all, I want you to know that I love you very much! Always have + always will. However, my greatest love and loyalty belong to Jehovah. Even above your dad.

… I’ve thought + prayed long + hard about this. But it has bothered me + made me sad for a long time to continue associating with you while you go along disregarding Jehovah’s standards. I mistakenly thought that by sharing new + encouraging things I’ve learned or sharing exciting experiences I’ve had that it might rekindle your love for Jehovah + all he’s blessed you with… But I can no longer, in good conscience, go on doing that.

I love you + will miss you + I look forward to a time when we can be united in serving Jehovah together as a family again. But, until then, please do not call me. This is non-negotiable. It is my response to Jehovah’s direction…

Can you imagine getting that letter from your own mother?

Can you imagine sending that letter to your own children?

How could anyone refuse to see a family member they genuinely love because they believe it’s what God wants? Think about the brainwashing that goes into that…

Maybe you’re wondering why the Jehovah’s Witnesses would tell believers not to communicate with people who left the faith. It’s because they think withholding that love will force those who are cast aside to come back. It’s emotional blackmail of the highest order.

It doesn’t even make sense, as if people will suddenly start believing in Jehovah just because they want so desperately to see their parents, and talk to them, and hug them once again. I’m sure there’s no shortage of people who fake belief just to get back in their JW family’s good graces.

This kind of manipulation, however, is appalling. This is why anti-theism often makes sense. This is why many atheists say they don’t “respect” religious beliefs. This is why we fight against irrational dogma.

And the saddest thing about this may be how few people know any of this is going on, even if they have friends who are Jehovah’s Witnesses.

July 18, 2016
Congressman Says He's Looking Into Why a God’s Not Dead 2 Ad Was Rejected by Cleveland Company
Next Post

July 18, 2016 A Christian Extremist Shot a Trans Woman In the Face, but Indiana Doesn't Call That a Hate Crime
"Love Popeye's, but the closest one for me is down in Kent.That's OK. Our local ..."
NOGODZ20 Atheists and Others Sue Trump Admin ..."
"I'm just an accidental particle, in a red dress... standing in front of a neutron... ..."
TS Bomboragh, Wahine Queen A North Dakota GOP Lawmaker Filed ..."
"Not me."
Holms A North Dakota GOP Lawmaker Filed ..."
"Or Tamir Rice. The fact that Tamir was killed by a cop doesn't make any ..."
jomicur Atheists Sue Ex-Education Secretary Betsy DeVos for ..."
Browse Our Archives
What Are Your Thoughts?leave a comment