South Carolina pastor Mark Burns delivered today’s benediction at the Republican National Convention and asked God to help guide Donald Trump in defeating the Democrats — proving once and for all that God really has nothing else going on in His life. 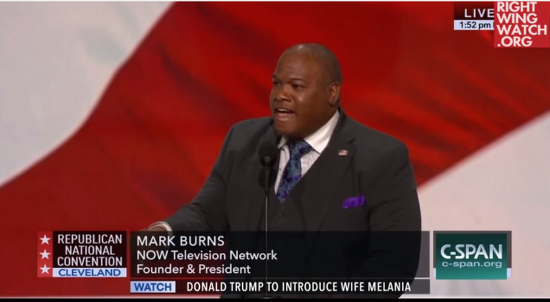 “Father God, in the name of Jesus, Lord, we’re so thankful for the life of Donald Trump,” he said. “We’re thankful that you are guiding him, that you are giving him the words to unite this party, this country, that we together can defeat the liberal Democratic Party, to keep us divided and not united. Because we are the United States of America, and we are the conservative party under God.”

Can you imagine if this happened at next week’s Democratic National Convention? If a pastor called on God to help defeat Republicans? It would become a(nother) point of attack against Hillary Clinton, as if she’s using religion to divide the country. But when Donald Trump and the Christian Right call on God’s help to promote their own political agenda, it’s somehow perfectly acceptable.

“I have rarely heard a more inappropriate contribution to political proceedings as the benediction by Pastor Mark Burns at the opening session of the Republican National Convention. The idea that a member of the clergy would invoke his God’s name and, in the next breath, declare the candidate from the other party to be the enemy seems to be an attempt to replace ‘nomination’ with ‘ordination.’ However, invoking religion to launch such attacks devalues faith and disrespects the people of the United States who are hoping for a debate on the issues, not an ‘ex cathedra’ pronouncement. Republican delegates should decline to respond ‘amen.’”

Maybe the strangest part of Burns’ speech was this line: “We are electing a man in Donald Trump who believes in the name of Jesus Christ.”

Has he even *heard* Trump speak about Jesus? The man clearly hasn’t opened any book, much less the Bible, in decades.

I know atheists love to talk about how gullible pastors are… but that one’s a stretch, even by Christian standards.