NBC News published an article about Bill Nye‘s recent visit to Ark Encounter, and there are some fantastic sound bites in there (“every single science exhibit is absolutely wrong”), but I want to draw your attention to one passage that was buried in the piece:

It’s unclear how much money the Ark has earned since opening. But in its first six days, a spokeswoman told NBC News there have been about 30,000 visitors.

Ham hopes to attract close to 2 million guests in the attraction’s first year.

That means there were fewer people visiting the Ark on the week that it opened — usually when you’d expect more people to visit — than he expects on a regular basis. If he couldn’t lure in paying customers on Week 1, how’s he going to entice more of them to visit on Week 52?

As usual with Creationists, the numbers just don’t make any sense.

Secondly, Ken Ham has been using that 2 million in attendance estimate for more than a year now.

But when state officials hired a third party to analyze projected attendance figures for Ark Encounter, in order to help them decide whether or not to give Ken Ham an $18 million gift courtesy of the taxpayers, they estimated that the Christian attraction would attract only 325,000 visitors in the first year, with the number eventually leveling off at about 275,000. 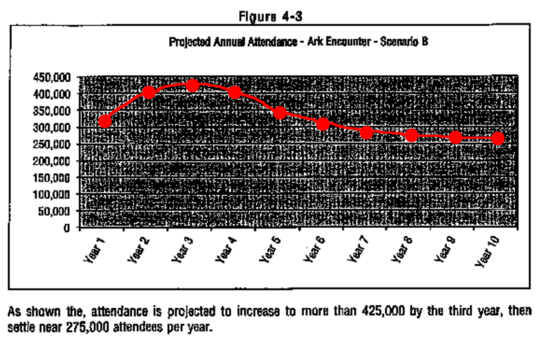 That’s a much more honest assessment of what will probably happen.

It seems like Ken Ham, much like Donald Trump, exaggerated the facts in order to get people to give him money. Because when you say millions of people will visit the Ark, instead of just a few hundred thousand, it’s more tempting for donors to give money to the project.

A $100 million attraction that brings in a mere 5,000 people a day, when there’s more publicity about the Ark than they’ll ever see again, doesn’t bode well for its future.

July 17, 2016
Richard Dawkins and Lalla Ward Have Announced Their Separation After 24 Years
Next Post

July 17, 2016 Many Evangelicals Believe Mike Pence Isn't Conservative Enough
Browse Our Archives
What Are Your Thoughts?leave a comment