Why Are Evangelicals Not Bothered by Donald Trump’s Obvious Hesitation Over Mike Pence? July 16, 2016 Hemant Mehta

Why Are Evangelicals Not Bothered by Donald Trump’s Obvious Hesitation Over Mike Pence?

If you want to know just how “persecuted” evangelical Christians are in this country, don’t watch God’s Not Dead or its sequel. Just look at Elizabeth Dias‘ article at Time.com about how much input evangelical leaders had into Donald Trump‘s selection of his running mate, Indiana Gov. Mike Pence. 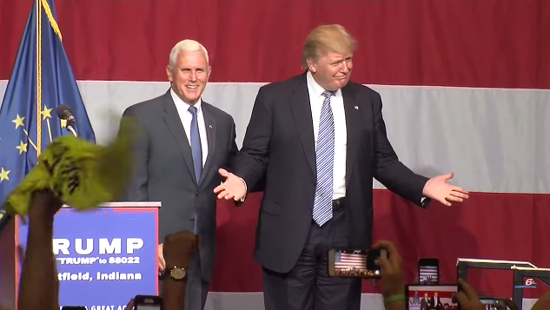 … I’ve made my decision, Donald Trump told Jerry Falwell, Jr., before revealing that Indiana Governor Mike Pence would be his running mate. “Nobody knows but you,” the Liberty University president says Trump told him.

After they hung up, Falwell called Franklin Graham, who was on vacation in Alaska, to get his thoughts. Falwell gave him Trump’s number so Graham could discuss his opinions with the candidate directly. After Graham talked with Trump, he and Falwell debriefed.

Televangelist James Robison, president of Life Outreach International, had also been talking with Trump’s team about the vice presidential selection.

You get the idea. The VP selection wasn’t made without input from multiple Christian leaders. They knew Pence was one of their own, they vouched for him, and he’s now on the ticket.

Don’t let anyone tell you evangelicals are being persecuted when they have that much power at the highest level of politics.

There is one entertaining aspect to this story: By all accounts, Trump isn’t enthusiastic about this selection at all. He waffled on Pence, calling advisors as late as Thursday night — after Pence had already traveled to New York City for the official announcement — to see if it was still possible to switch running mates.

That’s not surprising to anyone who’s watched Trump pretend to be a proud Christian for the past several months. For every statement about how the Bible is the greatest book ever, he bungles questions about his favorite verse, can’t properly say “2 Corinthians,” and brags about how he doesn’t need to ask for forgiveness. He’s never walked the walk and his attempts at talking the talk have been pathetic.

No wonder he isn’t drawn to Pence. Why would Pence’s standing among conservative Christians mean anything to Trump? He’s never valued them as anything except a means to an end. For all his attempts at appealing to conservatives, taking a hard line on social issues like LGBT rights, abortion, and science has never been his schtick. Now he’s committing himself to spending four years with someone who thinks about nothing else. It just doesn’t strike me as Trump’s idea of a good time. And now he’s stuck.

What’s amazing is that I haven’t heard Christian leaders react in any way to Trump’s waffling. They’ve praised the selection of Pence and said nothing about (or flatly denied) Trump’s hesitation on the pick, hoping, I guess, that Pence’s views will magically rub off on Trump. (That would at least explain the logo…)

The Christian leaders are ignoring the facts, embracing the parts of the story they want to hear, and putting on a show for the rest of the world.

Then again, they run Christian ministries. They’re experts at this.

July 16, 2016
Arkansas Will Allow Therapists to Discriminate for Religious Reasons
Next Post

July 16, 2016 GOP Platform Says Pastors Can Endorse Candidates from the Pulpit Without Losing Tax Exemptions
Browse Our Archives
What Are Your Thoughts?leave a comment