Al Jazeera Tackles Whether Religion is to Blame for Violence, but It’s Frustrating to Watch July 16, 2016 Hemant Mehta

Al Jazeera Tackles Whether Religion is to Blame for Violence, but It’s Frustrating to Watch

Mehdi Hasan, the host of Al Jazeera’s UpFront, hosted a conversation the other day about whether religion is to blame for violence.

Fascinating topic. Too bad the conversations were just full of facepalms. 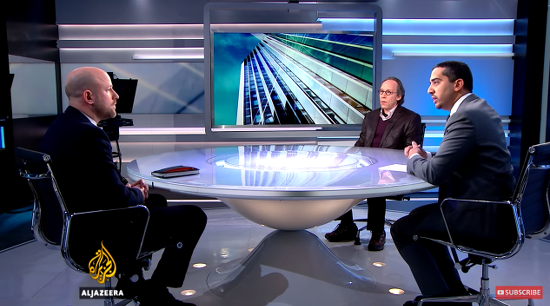 Hasan interviewed author Karen Armstrong, who downplayed religion’s role in a number of terrorist attacks, as if it’s not the prime factor in them. She also compared religious extremists to secular extremists (whatever that means).

There was also a joint interview with writer/physicist Lawrence Krauss and Humanist Chaplain Greg Epstein. Krauss, whom I generally agree with, spent much of the time defending himself for daring to criticize religion (even though it might alienate potential allies) and being very blunt about how belief in any supernatural deity is silly. Epstein shied away from criticizing religion at all, focusing on how we should all just get along… that may be easy to do when you’re working in interfaith circles, but it ignores the very real and very damaging effects religious beliefs have on the world.

What upset me the most was Epstein’s comments about how Craig Stephen Hicks, the man who murdered three Muslims in Chapel Hill, North Carolina last year, was an anti-theist, as if being overly critical of religion led to his horrific crime. As reporters have noted, there was far more going on in that situation than mere religious differences. And it’s worth pointing out that just about every major atheist group immediately condemned his actions. It was an anomaly that didn’t speak to anything but Hicks’ own sanity.

So back to the question at hand: Is religion to blame for violence? Not by itself, no — violence would exist even if people didn’t believe in God. But when you believe God is sending you a message that cannot be questioned, and you think your eternal salvation depends on how pious you are, and you live in a world where people either don’t respect your God or actively speak out against your beliefs, don’t be surprised when True Believers freak out. We’re all better off in a world where dogmatic thinking of any kind is regularly challenged. And religion is arguably the worst example of a belief that is immune to questioning.