Here’s the simplest test of religious pluralism at government meetings: What happens when non-Christians deliver invocation prayers, breaking with the tradition of the majority? And if Christians can’t handle it, should these prayers continue?

Last night, at a meeting of the Pensacola City Council in Florida, members of a local United Methodist Church tried everything they could to stop The Satanic Temple’s David Suhor from speaking. They interrupted him by singing the Lord’s Prayer multiple times in an effort to drown him out… but it didn’t work. The Christians were eventually told to be quiet or leave — some were kicked out — until Suhor had the floor to himself so he could sing his Satanic hymn. 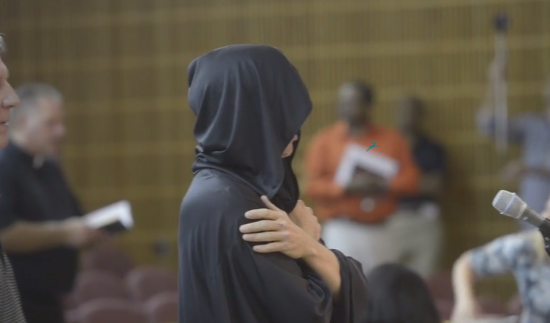 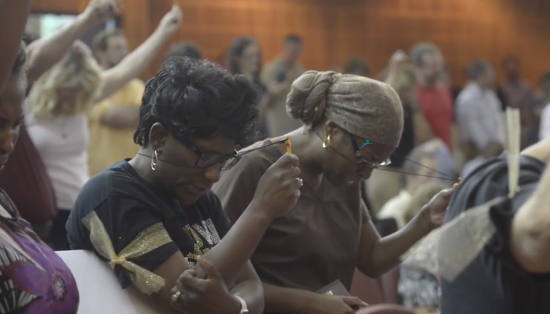 It’s a really incredible scene of Christians holding up their crosses, as if their symbols can balance out Suhor’s mockery, which they clearly can’t. But you really don’t get to see the mayhem in that video since you’re only watching what happened after the chaos subsided.

You get a much better sense of how the evening began in the videos below. You see Council President Charles Bare (who clearly deserves some coffee) telling the Christians to leave since Suhor has a right to speak. But it all descends into a local holy war until Suhor finally steps up to the mic.

Let us embrace the Luciferian impulse
to eat of the Tree of Knowledge
and dissipate our blissful
and comforting delusions of old.

Let us demand
that individuals be judged for their concrete actions,
not their fealty to arbitrary social norms
and illusory categorizations.

Let us reason our solutions
with agnosticism in all things,

Holding fast only to that which is demonstrably true,
Let us stand firm against any and all arbitrary authority
that threatens the personal sovereignty of One or All.

That which will not bend must break,
and that which CAN BE* destroyed by truth
should never be spared its demise.
It is Done. Hail Satan.

[Note: Suhor accidentally sang “is” instead of “can be” in the final stanza]

Beautiful, isn’t it? (There’s also a video of Suhor practicing the song on his own.)

One council member was so furious that he walked out as Suhor spoke:

Councilmember Wingate walks out of the meeting. Invocation is over now. @weartv pic.twitter.com/eXSml3UyAL

There is, of course, a simple solution to this whole problem. If Christians can’t handle non-Christians delivering invocations, no matter how serious (or not) the speakers take it, it’s up to the council members to do away with the silly ritual for good. It’s perfectly legal to say there won’t be invocations at all.

But as long as they keep prayers in meetings, we’ll keep seeing scenes like these.

By the way, two years ago, Suhor delivered a very nice, normal invocation at the same location. He gave a wildly entertaining Satanic prayer at a meeting of the Escambia County Board of County Commissioners in September of 2014. And then he staged something of a protest in January of 2015 at a meeting of the Escambia County School Board when a rabbi was invited to give an invocation over his requests.

Pushing buttons is what he does best, and he’s forcing people to think twice about keeping these prayers in meetings.

(Correction: The link to the church whose members protested Suhor’s speech has been corrected.)