Earlier this month, outside the Oswego (Illinois) Village Hall, there was a display that read “Bless the U.S.A.”

Absurd, right?! In fact, it caused a lot of controversy in the community… but not because the city was promoting a religious message. Rather, some people argued that it wasn’t religious enough: 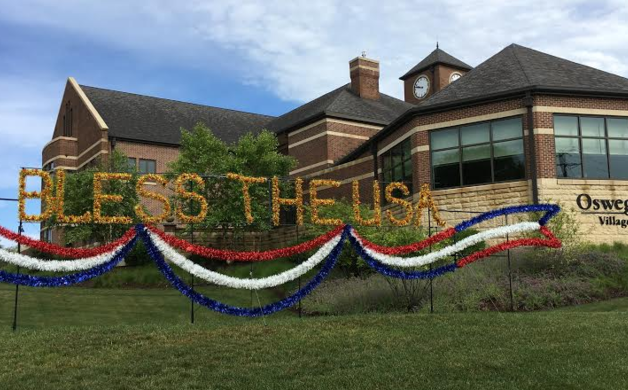 The “Bless the U.S.A.” sign that was donated to the Village of Oswego and displayed for the Fourth of July celebrations did not set well with quite a few folks who viewed it as yet another example of how we are taking God out of our country.

“Do they not know that the history of our country is based on ‘one nation under God?'” said the retired history teacher from West Aurora High School who taught the Constitution for more than four decades.

That guy taught the Constitution for more than four decades?! Christ…

Anyway, they were upset because it didn’t say “God Bless the U.S.A.”

Before you get out the pitchforks against city officials, Village Administrator Dan Di Santo said they had little to do with this:

Turns out the sign was donated by Temple Display, which creates and sells holiday decorations, after it was ordered by a customer but never paid for.

It was either take it or it was going in the trash, Di Santo insisted.

“The village saw it as a way to honor America and it had nothing to do with censoring God,” he said.

I would argue “Bless the U.S.A.” is still a religious message — after all, who’s doing the blessing? The sign should have gone in the trash or given to a local church.

But here’s the beautiful thing about all this. Because Christians complained that the sign wasn’t religious enough, Di Santo says they just won’t put it back up next year. So instead of implied government proselytizing, the Christians will get nothing.

The sign came down because the holiday is over. But Di Santo says it’s unlikely it will go back up again.

“If it offends some people,” he added, “then it’s just not worth it.”

Look at that! The Freedom From Religion Foundation didn’t even need to get involved!

July 15, 2016
Three More Candidates for Statewide Office Announce Their Non-Theism Before the Primaries
Next Post

July 15, 2016 Creationist Ken Ham Caught Misleading People About Ark Encounter's Attendance on Opening Day
Browse Our Archives
What Are Your Thoughts?leave a comment