With This Much Non-Religious Support for Hillary Clinton, Why Isn’t She Reaching Out To Us More? July 14, 2016 Hemant Mehta

With This Much Non-Religious Support for Hillary Clinton, Why Isn’t She Reaching Out To Us More?

A new Pew Research Center poll finds, not surprisingly, that white evangelical Protestants are overwhelmingly supporting Donald Trump (78%) while those of us who are religiously unaffiliated back Hillary Clinton (67%). 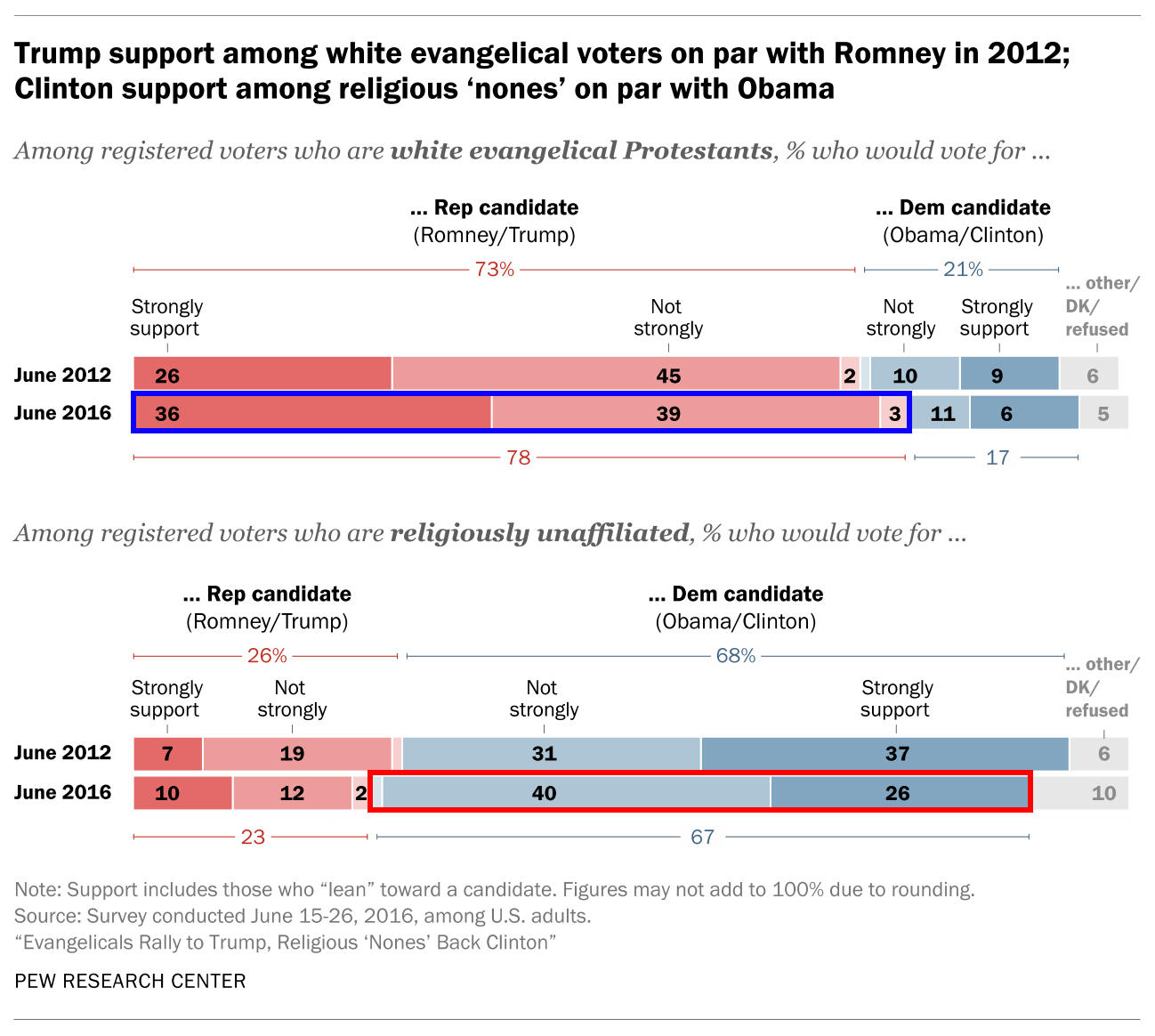 Here’s what I don’t understand.

Trump knows exactly who makes up his base and he’s gone out of his way to pander to evangelicals. He says the Bible is his favorite book (though good luck asking for specifics about it). He met with evangelical leaders. He appointed a “Religious Advisory Board” full of evangelicals. You get the idea. Lots of lip service and possibly worse, if he actually takes their recommendations.

Meanwhile, Clinton has done virtually nothing to appease her broad base of non-religious support. That’s not to say she’s going out of her way to be more religious than she really is, but where’s the None-specific outreach? For someone who’s finally come around on LGBT rights, she should be hammering home her support of church/state separation at every turn.

And if not her, because that’s seen as too risky, then her surrogates should be doing it.

It’s one of the major differences between the two parties’ platforms. It’s something a lot of religious people support as well. It’s silly for Democrats to ignore it because they’ve traditionally pandered to the religious, too.

Keep in mind that Nones represent more than a quarter of Democratic voters. We’re a voting bloc that’s being completely ignored.

And if you’re thinking that it’s unnecessary since we’re already in the bag for her… well, for the most part, so are evangelicals for Republicans. It’s about time Democrats solidify their base the way Republicans have done with conservative Christians.

There’s an irrational strain of thought in Democratic circles that reaching out to us would mean alienating everyone else. That’s just not true. We’re not asking Clinton to publicly embrace atheism. We’re asking her to be vocal about how she’ll respect and defend the First Amendment — including the Establishment Clause — when she’s in the White House, something she’s likely to do anyway.

July 14, 2016
No Wonder This Church Doesn't Want You to Play Pokémon Go on Its Property
Next Post

July 14, 2016 Ken Ham: If Students Visit Ark Encounter As Part of a Field Trip, I'll Only Charge Them $1
"That just means there will be more of you to grill. Er, I mean "love"."
WallofSleep Son of “Shaking Head Prophetess” Admits ..."
"” There have been protests in the streets against this song, ...”“I’m glad we gathered ..."
adhoc Orthodox Christians in Cyprus Are Protesting ..."
""... it’s disturbing that even they refuse to listen to the singer herself when she ..."
WallofSleep Orthodox Christians in Cyprus Are Protesting ..."
"I got my 2nd dose weeks ago, and the tracking chip zaps me whenever I ..."
Sassafras Survey: Atheists Are More Likely to ..."
Browse Our Archives
What Are Your Thoughts?leave a comment