Tim Tebow: I Won’t Be Speaking at the RNC… Now Let Me Talk About How God Loves You July 14, 2016 Hemant Mehta

Tim Tebow: I Won’t Be Speaking at the RNC… Now Let Me Talk About How God Loves You

One of the more surprising names to appear on the list of speakers at next week’s Republican National Convention was Tim Tebow, the Christian quarterback who never quite found his place in the NFL.

While Tebow is known for speaking out on causes he’s passionate about — like his anti-abortion (but ultimately toothless) Super Bowl ad in 2010 — he’s never gotten involved in politics. And starting a potential political career shilling for a misogynistic racist who appears to alienate every group he’s not a member of is a strange judgment call.

Late tonight, however, Tebow posted a video on Facebook calling his participating at the RNC a “rumor”: 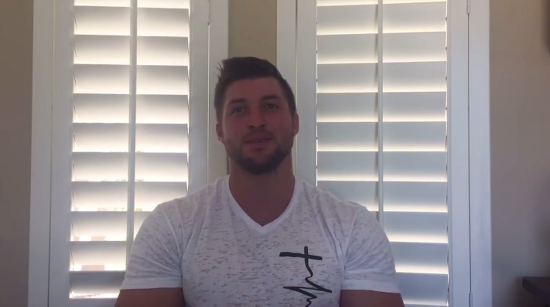 What’s up, everybody? Just got back from the Philippines and I wake up this morning to find out that I’m speaking at the Republican National Convention. It’s amazing how fast rumors fly, and that’s exactly what it is — a rumor.

My goal has always been to be able to make a difference in the biggest way possible, and if one day that’s [in] the political realm, then that’s what I’ll do. But right now, I really believe that that’s through my foundation and our amazing partners and fighting for kids that can’t fight for themselves.

But I love our country, and I’ll do anything for America. And one of the things that I love most is that it’s one nation under God.

And you know what that means? It means that you matter, that God has a plan for your life, and that every single person is significant. We all matter. So let’s come together on that. Let’s unite on that. Let’s forget about our quarrels and our differences, and let’s come together on one nation under God. That you matter, that He loves you, has a plan for your life.

That went from hungover, to normal, to inspiring, to pandering, to divisive. (OMG, he’s already speaking like a politician…)

We’re not going to unite under the banner of being “one nation under God,” because that’s the sort of irrational thinking that leads to poor decision-making. We need leaders who don’t think with their gut, like Trump, or through their Jesus glasses, like the rest of the Republican Party. We need leaders who can look at the evidence and make rational decisions, even if they’re unpopular and even if they’re counter-intuitive. Calling this a nation under God excludes the tens of millions of Americans who don’t believe in the Christian God or a Higher Power at all.

Tebow may not be speaking at the RNC, but his minute-long speech showed that he would fit right in there, alienating huge parts of the country through rhetoric that he truly and incorrectly thinks everyone will get behind.

July 14, 2016
My Message to Ark Encounter Protesters
Next Post

July 15, 2016 Christian Writer Condemns Pokémon Go Because "Pocket Monsters Using Special Powers" Are Evil
Browse Our Archives
What Are Your Thoughts?leave a comment