Last week, I heard from a reader named Mandy Heath who is planning to marry her fiancé Jon later this month. Because a friend without any legal credentials was going to perform the ceremony, they planned to visit a local courthouse in Trigg County, Kentucky the day before the wedding to take care of the official paperwork under the watch of a judge. It’s something couples do all over the country.

She just had one request for County Judge Executive Hollis Alexander: Because she and her fiancé were both non-religious, they didn’t want any mention of God in the ceremony.

The judge wouldn’t do it. He told them, “I will be unable to perform your wedding ceremony… I include God in my ceremonies and I won’t do one without.” 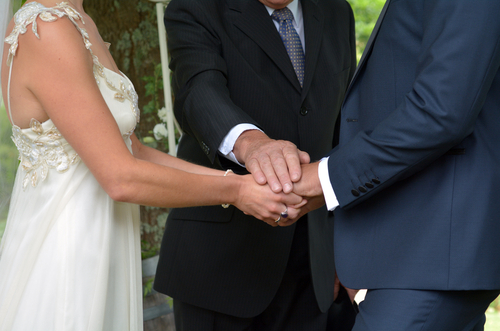 There was no other judge who could perform wedding ceremonies, so he directed them to a judge in a neighboring county.

(By the way: I called Judge Alexander earlier this week to confirm this story, which he did. He added that he also refuses to perform same-sex ceremonies. So there’s that.)

In any case, the Freedom From Religion Foundation’s attorney Andrew Seidel soon sent Judge Alexander a letter reminding him how the law works:

As a government employee, you have a constitutional obligation to remain neutral on religious matters while acting in your official capacity. You have no right to impose your personal religious beliefs on people seeking to be married. Governments in this nation, including the Commonwealth of Kentucky, are secular. They do not have the power to impose religion on citizens.

The bottom line is that by law, there must be a secular option for people seeking to get married. In Trigg County, you are that secular option. The default ceremony offered by your office should be secular and people wishing to add in religion should be able to do so upon request. Not the other way around and certainly not to the exclusion of a secular option.

Whether a lawsuit is forthcoming, I don’t know. I can’t speak for Mandy here, but I doubt she wants her wedding marred by a legal battle. In any case, asking a judge to perform a secular ceremony isn’t an irrational, oppressive request. No one’s asking him to deny his faith while doing his duties. He’s just being asked to do his job.

And just like Kim Davis, another Kentucky government official, he’s refusing to do it.

July 14, 2016
If Donald Trump Selects Newt Gingrich as Vice President, It Would Be a Disaster for Atheists
Next Post