If Donald Trump Selects Newt Gingrich as Vice President, It Would Be a Disaster for Atheists July 14, 2016 Hemant Mehta

If Donald Trump Selects Newt Gingrich as Vice President, It Would Be a Disaster for Atheists

While the pundits are leaning toward Indiana Governor Mike Pence as Donald Trump‘s likely running mate, Newt Gingrich is still very much in the running. As we await the official announcement tomorrow morning, if it’s not leaked earlier, it’s worth exploring some of the times Gingrich disparaged atheists or announced (wrongly) that we live in a “Christian Nation.”

His statements give us a strong indication of what policies he’d push if he were back in a position of power. And since Trump is, by his own admission, not a politician, his VP’s policy decisions would carry even more weight than usual. 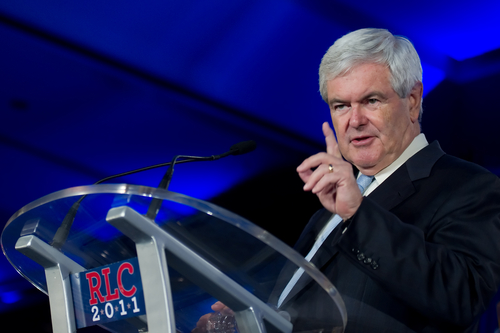 In the run-up to the 2012 presidential election, then-candidate Gingrich told CNN moderator Anderson Cooper that, for him, faith was a prerequisite to holding public office — and that people without faith couldn’t be trusted in the same position.

I happen to think that none of us should rush in judgment of others in the way in which they approach God. And I think that all of us up here I believe would agree.

But I think all of us would also agree that there’s a very central part of your faith in how you approach public life. And I, frankly, would be really worried if somebody assured me that nothing in their faith would affect their judgments, because then I’d wonder, where’s your judgment — how can you have judgment if you have no faith? And how can I trust you with power if you don’t pray?

It was such an ignorant statement — dismissive of atheists (and even many non-Christians) in elected office — that American Atheists used it in a billboard campaign the following year to promote their annual convention:

During a 2011 speech at Cornerstone Church in San Antonio, Texas, Gingrich also warned the audience about the terrible road our country was heading down, one in which atheist Muslims (yep) would endanger everyone:

“I have two grandchildren — Maggie is 11, Robert is 9,” Gingrich said at Cornerstone Church here. “I am convinced that if we do not decisively win the struggle over the nature of America, by the time they’re my age they will be in a secular atheist country, potentially one dominated by radical Islamists and with no understanding of what it once meant to be an American.”

Yes, we should all be on the lookout for those atheists who want to turn the nation into an Islamic theocracy… I’ve never met one of them, but I’m sure we should be worried.

2011 also saw Gingrich, still campaigning for the Republican presidential nomination, proposing a Presidential Commission on Religious Freedom, which he would create by way of Executive Order on his first day in office. The mission for the group made clear that Gingrich saw this as a “Christian Nation” — and the First Amendment’s Establishment Clause wasn’t going to get in the way of his promotion of that myth:

“The Founders knew that in a free society religious vibrancy is the surest bulwark against government corruption. And yet their method of promoting and protecting religious vibrancy was an exception to historical precedent. To understand why, one must first recall just how deeply and fervently committed the Founders were not to an abstract notion of faith, but to a faith that was explicitly Christian.”

“The Founders would have regarded such efforts to remove God and religious expression from public life as a fundamental threat to liberty. They saw no contradiction between the First Amendment, which was designed to protect religious liberty, and the need for a free people to remember that their liberties come from God.”

“No attack on American culture is more historically dishonest or socially destructive than the relentless effort to drive God out of America’s public square.”

God has never been driven out of the public square. It’s just one of many lies evangelicals love to tell each other. The only thing that has been challenged is government endorsement of religion — just as it should be. Someone should also remind Gingrich that many of the Founders were Deists, and the ones who were Christian certainly wouldn’t recognize the faith practiced by Gingrich today.

This wasn’t just candidate Gingrich trying to appeal to his right-wing base. In 2008, after President Obama was elected, Gingrich spoke with Bill O’Reilly about protesters who were opposed to California’s Proposition 8 (which had just passed) and made this comment:

I think there is a gay and secular fascism in this country that wants to impose its will on the rest of us, is prepared to use violence, to use harassment. I think it is prepared to use the government if it can get control of it. I think that it is a very dangerous threat to anybody who believes in traditional religion.

Since that time, we’ve seen a lot of violence in the name of religion — against abortion doctors, LGBT individuals, random people — but the violent gay/secular fascists have yet to be found.

There are also Gingrich’s books Rediscovering God in America (the title speaks for itself) and To Save America: Stopping Obama’s Secular-Socialist Machine. In the latter, he wrote:

The wall of separation these secularists seek to enforce is really one between the historic America and the radically different America they want to create — an America without God, traditional values, or knowledge of its own history.

As if the goal of atheists everywhere is to tamper with traditions, no matter what they are, and remain ignorant of our past. It’s a lie. The America most atheists want to see is one where people aren’t punished or promoted for what they believe about God.

Here’s what we can take away from all this: Trump may choose Gingrich as his Vice President because, presumably, he needs someone with experience who can help him navigate through Congress. But if Gingrich, like Dick Cheney before him, is really the brains of this operation, you can expect an Executive Office dedicated to promoting his brand of Christianity at all costs. It’s not just about Gingrich’s personal preference; he sees this as an existential crisis for America.

If you care about church/state separation, then realize this ticket would be dedicated to tearing down the wall between the two worlds. It’s a disaster in the making, a match made in hell. But, as the Atlantic‘s David A. Graham pointed out, it really would be a match:

[Gingrich] also shares some things with Trump, including an unflagging and perhaps inflated sense of his own intellect, [a] propensity to say outlandish things, and three marriages.

And both men will do anything to pander to the Religious Right.

The difference is Gingrich actually seems to believe his own bullshit.

Let’s hope he’s not the selection. Mike Pence wouldn’t be any better, to be sure, but Gingrich would be an unmitigated disaster for those of us who respect the First Amendment.

July 14, 2016
Here's What Really Going On in That Photo of a "Floating Spirit" After a Fatal Motorcycle Accident
Next Post