Here’s What Really Going On in That Photo of a “Floating Spirit” After a Fatal Motorcycle Accident July 14, 2016 Hemant Mehta

On Tuesday, Saul Vazquez, a Kentucky truck driver, saw a motorcycle accident on the highway, took a picture, and posted it on Facebook. It’s gone viral over the past couple of days because of what some people think is a dead man’s “spirit” floating up to Heaven (between the two ambulances): 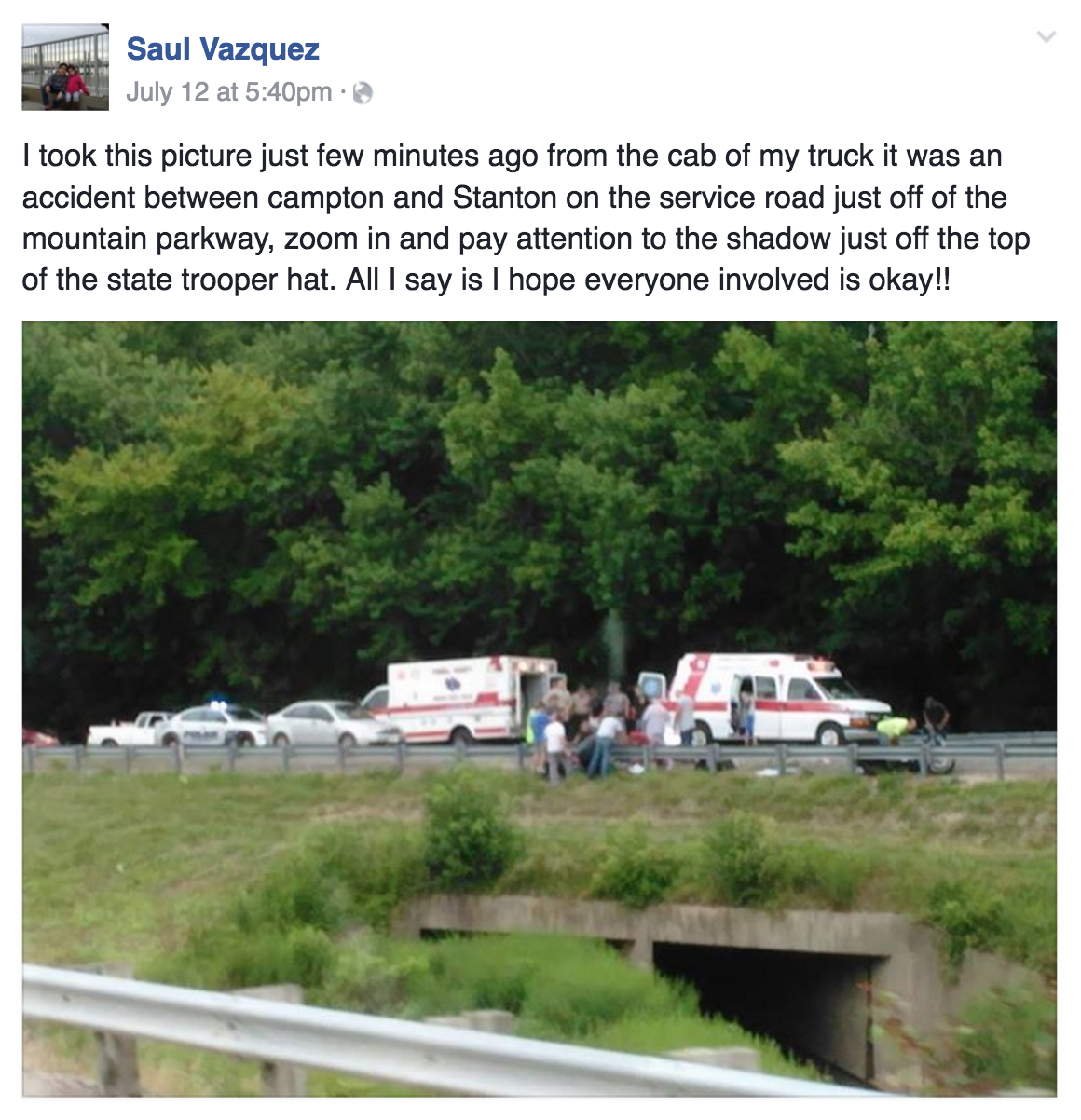 First of all, why the hell is anyone taking a picture of an accident scene? That’s unethical, to say the least.

But since so many people are convinced this is the soul of the man floating up into space, let’s talk about why they’re all wrong. The story doesn’t add up and there are plenty of reasonable explanations for what we’re looking at:

1) According to news reports, the motorcyclist didn’t die until after he reached the hospital. I’ve never heard of a spirit leaving a body before death. Did God jump the gun?

2) Vazquez pointed out that he took the picture “from the cab of my truck” — that is, the driver’s seat. If his window was rolled up, it’s possible we’re not looking at a spirit, but a smudge on the window that appeared on film. What if he rolled down the window? Then he should check whether his camera lens is clean.

4) It could be smoke from the wreckage or other vehicles.

5) If it was a spirit, isn’t it amazing that none of the emergency workers on the scene noticed what was right in front of them, but a truck driver who gawked from a distance managed to capture it on film?

The point is this: If anyone believes this is proof of God’s existence or a real spirit floating above a (technically alive) man, they’re really gullible. There are plenty of reasonable explanations for what we’re looking at that don’t involve anything supernatural at play.

If this is the best proof God can give us, He should find a new line of work.

(Thanks to Dale for the link)

July 14, 2016
Ken Ham: If Students Visit Ark Encounter As Part of a Field Trip, I'll Only Charge Them $1
Next Post

July 14, 2016 If Donald Trump Selects Newt Gingrich as Vice President, It Would Be a Disaster for Atheists
"Man, all I hear from these pastors is "God is coming! God is coming!" over ..."
Ondřej Čtrnáct Christian Nationalist Preacher: God Will Soon ..."
"I'm old enough to remember when women cops were the exception, and recall the night ..."
Richard Grabman Right-Wing Activist Dave Daubenmire: “A Woman’s ..."
"Maybe a pool Laddie"
Zizzer-Zazzer-Zuzz Liberty University Just Sued Jerry Falwell, ..."
"I'm late but I can makeup for lost time."
muttpupdad Atheist Sues L’Oreal Over Repeated Acts ..."
Browse Our Archives
What Are Your Thoughts?leave a comment