The extremely hyped and unreasonably controversial Ghostbusters reboot won’t be released in China, says The Hollywood Reporter, because the nation censors films that “promote cults or superstition.”

And a movie about busting ghosts involves, well, ghosts. 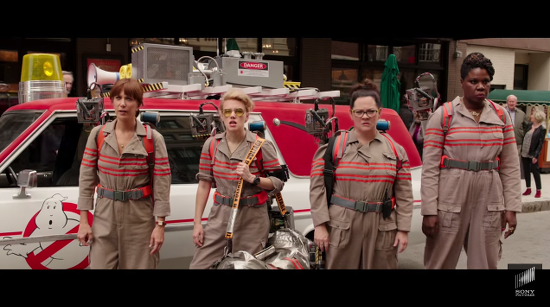 … the country’s regulators occasionally have been known to use this obscure provision as rationale for banning films that feature ghosts or supernatural beings in a semi-realistic way (Disney’s Pirates of the Caribbean: Dead Man’s Chest suffered such a fate in 2006, thanks to its depictions of ghouls and cannibalism).

In case you’re wondering, the original Ghostbusters wasn’t screened in Chinese theaters, either.

Producers of the newer film were hoping they could get around the censors by calling the movie by a different name, 超能敢死队, which roughly translates to “Super Power Dare-to-Die Team,” but that doesn’t appear to have worked. Though I’m not sure why it would, since anyone who watched the movie would’ve figured it all out…

It should be noted that one Chinese official says censorship wasn’t the main issue. The state-owned film body just felt it wouldn’t be a popular film:

“It’s been confirmed that Ghostbusters won’t be coming to China, because they think it’s not really that attractive to Chinese audiences,” says one Chinese executive. “Most of the Chinese audience didn’t see the first and second movies, so they don’t think there’s much market for it here,” the exec adds.

In any case, the movie won’t be on China’s big screens for the time being, possibly because of a silly holdover from the country’s Communist past. It’s an irrational and completely unnecessary form of censorship.

July 14, 2016 The Problems With Ark Encounter: Liberal Redneck Edition
"Hmm, why don't they turn to prayer?"
Jezebel'sOlderSister Why is FEMA Giving a Church $2 ..."
"I am pro vaccination. I find the parents refusing to vaccinate thier kids to be ..."
alconnolly Connecticut House Passes Bill Removing Religious ..."
"This cartoon made me think.I've had skype or zoom meetings with people in other countries ..."
smrnda Anti-Mask Flat Earther Says Government Kidnapped ..."
"Audit ordered by the GOP-controlled state senate, executed by a private Florida-based company and supported ..."
NOGODZ20 Anti-Mask Flat Earther Says Government Kidnapped ..."
Browse Our Archives
What Are Your Thoughts?leave a comment