Last week, Kelly Shackelford, president of conservative legal group First Liberty Institute, explained that the increased racial tensions in our country are caused by a rejection of God in our society. 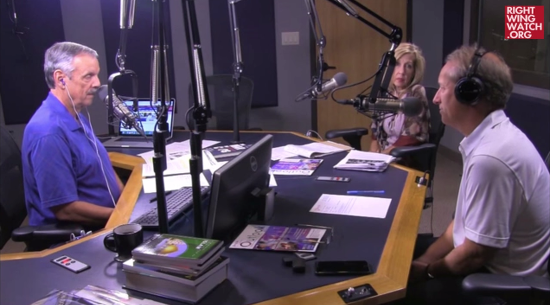 “Evil will come in when there’s a vacuum, and our country is moving away from God, and as it moves away from God, there’s all kind of little tussles going on over morality because it’s sort of like God’s been pushed out of the field, and when that happens, I mean, you know, Satan’s gonna use that as his playground,” Shackelford said. “And so we’re seeing things like this racial tension and these other things that are almost being fomented.”

As if racism wasn’t a problem before atheists began speaking up…?

It was Martin Luther King, Jr. who once said, “the most segregated hour of Christian America is eleven o’clock on Sunday morning.” And he was right. Some Christians have indeed used the Bible to justify racism — case in point: Bob Jones University’s interracial dating ban, which was in effect until 2000.

Obviously, other Christians have fought for racial reconciliation because of their faith, too. The whole point is that a move “away from God” has absolutely nothing to do with the racism problem in our society. But this is what conservative Christians do. There’s no problem in the world that can’t be blamed on people who disagree with them.

July 13, 2016
Giant Ad for God's Not Dead 2, Outside GOP Convention, Rejected for Being "Way Too Incendiary"
Next Post

July 13, 2016 Bryan Fischer: "It's Not Okay for Christians to Have Diverse Opinions About Evolution."
Browse Our Archives
What Are Your Thoughts?leave a comment