Note to Church: Before Mocking Dyslexic Atheists, Have Someone Proofread Your Sign July 13, 2016 Hemant Mehta

Note to Church: Before Mocking Dyslexic Atheists, Have Someone Proofread Your Sign

The Christ Gospel Tabernacle Church in St. Clair Shores, Michigan decided to use the sign outside the building to poke a little fun at atheists. But one woman says it went too far. 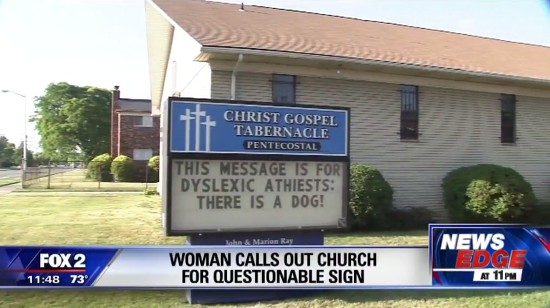 The message, much like a dad joke, was relatively straightforward, unfunny, and groan-worthy: “This message is for dyslexic athiests: there is a dog!”

But a local school administrator who works with people with disabilities didn’t see the humor — perhaps for good reason:

“I was offended by it,” she said. “People who have dyslexia, they have a disability. It’s very insensitive to put something like this in the public eye.”

Part of me says the church wasn’t intentionally trying to mock dyslexic people so critics should let it go… and part of me says Bond is right because we shouldn’t mock people for things that are out of their control.

Then again, I don’t really have a God in the fight.

But let’s not forget the part of the story not making headlines: In its effort to mock dyslexic atheists, the church misspelled “atheists.”

How’s that for irony.

July 12, 2016
The Significance of Atheism, As Explained by George H. Smith
Next Post

July 13, 2016 The Big Question Lab: Why an Atheist Sunday School Makes a Lot of Sense
"Anybody remember what happened when Jesus found money in the temple?First, he got himself a ..."
NOGODZ20 A Plumber Found Envelopes Full of ..."
"So then you realize that SAs perpetrated by a trans woman in a woman's prison ..."
DC Kurtz Richard Dawkins Urges People to Sign ..."
"IF he is discussing the physical distinctions rather than the gender identity distinctions, there might ..."
VinnyJH Richard Dawkins Urges People to Sign ..."
"He did not speak of it, though."
NOGODZ20 A Plumber Found Envelopes Full of ..."
Browse Our Archives
What Are Your Thoughts?leave a comment