This September, Pastor Steven Anderson and his Baptist buddies are planning to visit South Africa for a “soul-winning marathon.” They’re gonna try and convert everyone they can.

The problem with all this is that South Africa’s Constitution forbids discrimination by the government and private parties on the basis of sexual orientation. Hate speech is also prohibited (it’s an exception to the free speech rule).

So how does all that apply to a pastor who celebrated the deaths of dozens of people at a gay nightclub in Orlando by saying, “The good news [about the massacre] is that there’s 50 less pedophiles in this world, because… these homosexuals are a bunch of disgusting perverts and pedophiles”? The pastor who says the government should execute homosexuals by way of a firing squad because that’s what the Bible commands?

Pastor Steven L Anderson, Paul Wittenberger, and about 20 or so others from the US and Canada will be coming to Johannesburg and holding a soul-winning marathon on Sunday, September 18, 2016. We are going to be meeting at Running Waters Spur in Festival Mall for breakfast and fellowship from 9am-10am. We will then go soul-winning from 10:30am-12:30pm. From 1pm-2pm, we will have lunch at Wimpy in Festival Mall and prepare for another round of soul-winning from 2:30pm-4:30pm. Last of all, we will hold a church service at 7pm at Premier Hotel OR Tambo, where Pastor Anderson will preach.

That’s three venues for food, preaching, and proselytizing… and all three appear to be rejecting the hate-mongers.

Premier Hotel OR Tambo says Anderson is not welcome there: 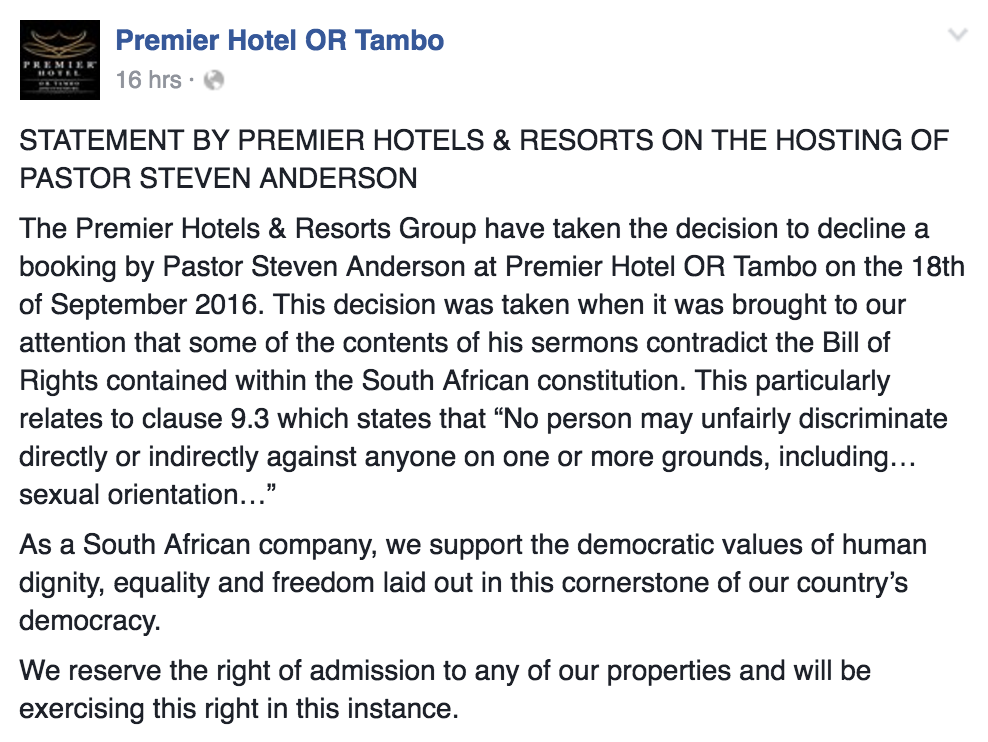 The Premier Hotels & Resorts Group have taken the decision to decline a booking by Pastor Steven Anderson at Premier Hotel OR Tambo on the 18th of September 2016. This decision was taken when it was brought to our attention that some of the contents of his sermons contradict the Bill of Rights contained within the South African constitution. This particularly relates to clause 9.3 which states that “No person may unfairly discriminate directly or indirectly against anyone on one or more grounds, including…sexual orientation…”

As a South African company, we support the democratic values of human dignity, equality and freedom laid out in this cornerstone of our country’s democracy.

We reserve the right of admission to any of our properties and will be exercising this right in this instance.

They added in a comment that Anderson was informed of this before he made his announcement and that he would be receiving a refund.

What about Running Waters Spur in Festival Mall? Here’s the statement one person received from the restaurant yesterday: 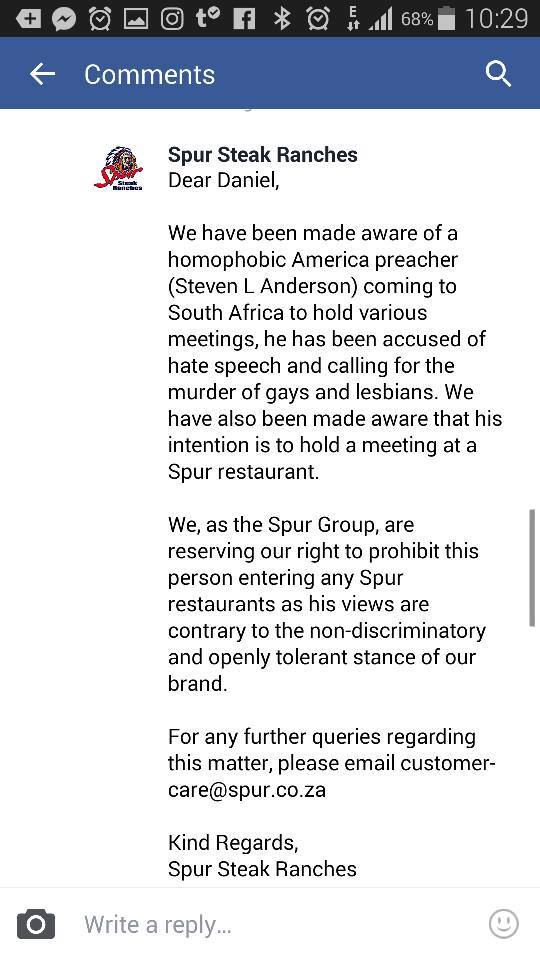 We have been made aware of a homophobic America preacher (Steven L Anderson) coming to South Africa to hold various meetings, he has been accused of hate speech and calling for the murder of gays and lesbians. We have also been made aware that his intention is to hold a meeting at a Spur restaurant.

We, as the Spur Group, are reserving our right to prohibit this person entering any Spur restaurants as his views are contrary to the non-discriminatory and openly tolerant stance of our brand.

For any further queries regarding this matter, please email customer-care@spur.co.za.

Finally, what about Wimpy? They haven’t released an official statement, but they have told individuals that their legal team is looking into this and that “we do not permit any preaching or religious gathering in a Wimpy restaurant.”

Wimpy’s management also told a reporter that they are “unable to refuse him entry,” though telling Anderson he can’t preach there is more or less the same kind of punishment.

In addition to all that, there’s an online petition calling for the “Department of Home Affairs to refuse entry to this man.”

Anderson hasn’t responded publicly to all this yet, but you can expect a hate-filled rant very soon, I’m sure.

(Screenshot via YouTube. Thanks to Paulo and Gregory for the link)

July 13, 2016
The Big Question Lab: Why an Atheist Sunday School Makes a Lot of Sense
Next Post