Bryan Fischer: “It’s Not Okay for Christians to Have Diverse Opinions About Evolution.” July 13, 2016 Hemant Mehta

Bryan Fischer: “It’s Not Okay for Christians to Have Diverse Opinions About Evolution.”

It’s never good when Creationist Ken Ham makes more sense than someone else on an issue involving evolution, but he has the upper hand here.

Religious Right leader Bryan Fischer said on his show this week that Christians must agree on issues involving marriage equality and evolution. He was implicitly saying people who support gay marriage or accept science can’t be True Christians™. 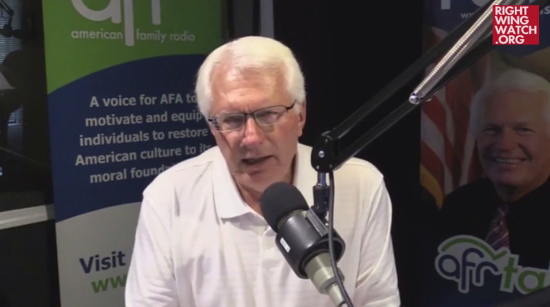 “No, it is not okay for Christians to be all over the map, to have diverse opinions,” Fischer insisted. “No, it’s not okay. The Bible is abundantly clear about sexual ethics, sex is reserved for marriage, marriage is a union of one man and one woman, homosexuality is a sin, sexual immorality is a sin, et cetera. These things are not ambiguous in the scripture so, no, it’s not okay to have diverse opinions on those issues.”

That stands in direct contrast with Ham, who has said before that Creationism is hardly a make or break issue.

Numerous other [Bible] passages could be cited but not one of them states in any way that a person has to believe in a young earth or universe to be saved.

Scripture plainly teaches that salvation is conditioned upon faith in Christ, with no requirement for what one believes about the age of the earth or universe.

Ham’s fear is that if you don’t believe in a literal Genesis, the dominoes may topple over to the point that you no longer accept the Bible at all. (Spoiler: He’s right.) But he will freely admit that there are True Christians™ who disagree with him about Young Earth Creationism.

Fischer can’t even bring himself to say that. The only real Christians are the ones who agree with him.

July 13, 2016 Atheist Students Urge Leaders of Both Parties to Adopt Godless Platforms at Their Conventions
Browse Our Archives
What Are Your Thoughts?leave a comment