Here’s a nifty bit of activism. Over the weekend, during the Secular Student Alliance’s conference in Columbus, Ohio, attendees sent more than 200 letters to the leaders of both political parties’ platform committees urging them to adopt secular language at their conventions. 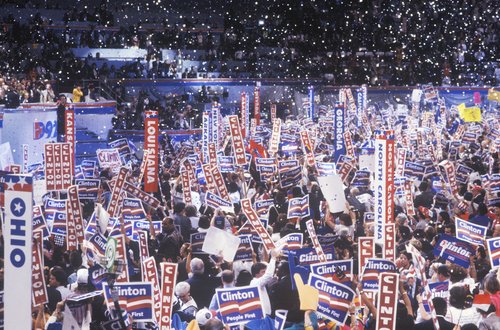 We are requesting that you keep your party platform secular by removing references to God, on behalf of the millions of secular Americans that share our values. We would like to see your party become inclusive to the growing secular community who are alienated by religiously exclusive language.

Our nation was the first modern secular democracy, founded with principles based on American Enlightenment ideals. We ask that you hold true to these principles by relying upon reason, history, tradition, compassion, science, and philosophy to guide and inform your party’s platform.

We urge you to consider the wisdom of the Framers of the United States Constitution, who gave us a Republic. Let us keep it godless.

We know the Republicans didn’t take the hint. Their proposed platform (to be adopted next week) calls on lawmakers to use religious principles to guide lawmaking and push for the Bible to be taught in public schools. It also stresses our “God-given, natural rights.”

Is there any hope with Democrats?

In 2012, the DNC’s platform not only promoted faith, they added in the phrase “God-given potential” after a truly haphazard vote. Not the most egregious sin ever committed, but still frustrating.

Can’t we have at least one major party that doesn’t have to resort to supernatural nonsense in their efforts to make the country a better place?

The atheists weren’t calling for the adoption of an anti-religious platform, merely one that remains neutral on matters of religion. It’s not a lot to ask for.

July 13, 2016
Bryan Fischer: "It's Not Okay for Christians to Have Diverse Opinions About Evolution."
Next Post

July 14, 2016 No Wonder This Church Doesn't Want You to Play Pokémon Go on Its Property
Browse Our Archives
What Are Your Thoughts?leave a comment