The Significance of Atheism, As Explained by George H. Smith July 12, 2016 Hemant Mehta

The Significance of Atheism, As Explained by George H. Smith

Before Richard Dawkins and Christopher Hitchens ever wrote about religion, before blogs were around, and long before the mainstream was ever talking about atheism in any meaningful way, there was George H. Smith.

His book Atheism: The Case Against God was published in 1974. For many people who grew up in that era, it offered them a glimpse into why atheism made any sense. Sure, it was academic and philosophical in nature, but it made the case against God in a way that many people still use in debates today.

Maybe even more surprising is that Smith began writing the book at age 22 and finished it at age 24. All the more reason to take another look at a book that’s had such remarkable influence.

Prometheus Books is reissuing the book today, with a foreword from Lawrence Krauss and an epilogue from Smith himself. 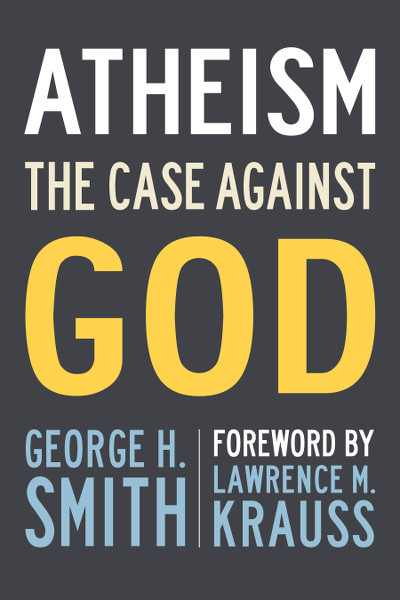 In the excerpt below, Smith writes about the significance of atheism:

It may be objected that we have reduced atheism to a triviality. It is not a positive belief and does not offer any constructive principles, so of what value is it? If atheism may be compared to not believing in magic elves, why is it important? Why devote an entire book to a trivial subject?

Atheism is important because theism is important. The subject of god is not a remote, abstract topic with little influence in the lives of men. On the contrary, it is the core of Western religion — specifically, the Judeo-Christian tradition — which includes a system of doctrines dealing with every major branch of philosophy.

If one believes, as I do, that theism is not only false, but is detrimental to man as well, then the choice between theism and atheism assumes a major importance. If considered purely as an abstract idea, theism may be dismissed without extended discussion. But when considered within its proper context — within the framework of its historical, cultural, philosophical and psychological significance — the question of god is among the most crucial subjects of our time.

If, thousands of years ago, a cult of elf-worshipers originated a set of doctrines, a religion, based on their belief in elves — and if these doctrines were responsible for widespread harm — then this book might be entitled The Case Against Elves. Historically, however, god has had more appeal than elves, so we are discussing The Case Against God instead.

Although atheism is negative in character, it need not be destructive. When used to eradicate superstition and its detrimental effects, atheism is a benevolent, constructive approach. It clears the air, as it were, leaving the door open for positive principles and philosophies based, not on the supernatural, but on man’s ability to think and comprehend.

Religion has had the disastrous effect of placing vitally important concepts, such as morality, happiness and love, in a supernatural realm inaccessible to man’s mind and knowledge. Morality and religion have become so intertwined that many people cannot conceive of ethics divorced from god, even in principle — which leads to the assumption that the atheist is out to destroy values.

Atheism, however, is not the destruction of morality; it is the destruction of supernatural morality. Likewise, atheism is not the destruction of happiness and love; it is the destruction of the idea that happiness and love can be achieved only in another world. Atheism brings these ideas down to earth, within the reach of man’s mind. What he does with them after this point is a matter of choice. If he discards them in favor of pessimism and nihilism, the responsibility lies with him, not with atheism. By severing any possible appeal to the supernatural — which, in terms of human knowledge, means the unknowable — atheism demands that issues be dealt with through reason and human understanding; they cannot be sloughed-off onto a mysterious god.

If atheism is correct, man is alone. There is no god to think for him, to watch out for him, to guarantee his happiness. These are the sole responsibility of man. If man wants knowledge, he must think for himself. If man wants success, he must work. If man wants happiness, he must strive to achieve it. Some men consider a godless world to be a terrifying prospect; others experience it as a refreshing, exhilarating challenge. How a person will react to atheism depends only on himself — and the extent to which he is willing to assume responsibility for his own choices and actions.

Atheism: The Case Against God is now available on Amazon and in bookstores.

From Atheism: The Case Against God (Prometheus Books, 2016), reprinted with permission from the publisher.

July 12, 2016
Pat Robertson: Church/State Separation Groups Pick on Christians Because of the Devil
Next Post

July 13, 2016 Note to Church: Before Mocking Dyslexic Atheists, Have Someone Proofread Your Sign
Browse Our Archives
What Are Your Thoughts?leave a comment